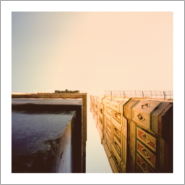 The recent Con-V netlabel release When the Drummer Is Smoking is credited to two musicians: Gintas K and GyS. Thing is, it only has Gintas’s music on it. Why? Let’s have Gintas explain:

“In 2006, me and GyS talked about collaboration, in which we could use each other’s material. We exchanged the raw files. I completed my part, composed from his sounds (mostly guitar sound). In the middle of GyS’ work his computer crashed and all his work was lost. Only my part left, and it is on this ep.”

While this isn’t a joke (certainly not to GyS, who lost his work in the process), it’s not without its inherent humor, so it’s as close as I’m going to come to having an April Fool’s prank on Disquiet.com this year. (April 1 is the day each year I do my best not to even look at the Internet, as I almost always fall for something — like back in 2004, when the story circulated that Brian Eno had signed on to update the theme song to the long-running BBC soap opera, The Archers.)

To listen to When the Drummer Is Smoking is to hear half a performance, whether the rattling bell and slow bass line on the opening track (MP3), or the wildly looping static and curt riffs on the second (MP3). The EP has five tracks, numbered one through five, with the exception of number four, which bears the EP’s title. It’s a thick, wild synthesizer fantasia (MP3).