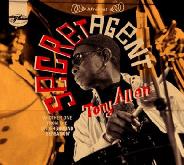 The masterminds behind the remix contest focused on famed Afrobeat drummer Tony Allen (best known as the backbeat of legend Fela’s band) want us to download the 15 constituent parts of the single “Secret Agent,” the title track off his new album on World Circuit label. And no doubt the promise inherent in those tracks will draw in participants. But there’s much pleasure to be had in the raw materials — how often, when you think about it, do we get nearly six straight minutes of Tony Allen drumming, which is freely available here, a trenchant rhythm that’s liked the most stripped-down Meters metric you’ve ever heard? Likewise, amid the emotive backing (and foreground) vocals and syrupy-slick guitars, there’s a fine synthesizer line available all on its delectable lonesome. And for those truly looking to Zen out, there’s even five-plus minutes of a low-volume shaker, rattling along as steady as can be.

The contest is hosted at soundcloud.com, which provides the following handy interface for accessing the goods:

For those who want to make something of the available mixing-board tracks, the due date for the contest is July 7. More details at tonyallenremixcontest.blogspot.com. More on the release at worldcircuit.co.uk.