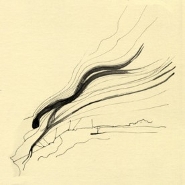 There’s nothing that unusual about synth washes that sound like scores to late-20th-century Italian science-fiction films, all artificial winds and overly cool, domesticated breezes. Nor is there anything special about rough, urban soundscapes that emphasize water-drop textures and other little noises that suggest the audio equivalent of an old, damaged film strip. What is unusual is when those two sounds are combined, as they are on the Kurland album, recently released by the Latvian act Astrowind on the Resting Bell netlabel. There are 15 tracks on the album, and given the ever expanding zone of freely legally downloadable music, a little guidance might be in order. To wit, the recommendation goes to the track “Buran,” which grounds the wavering synthesized tones in a dank midtemo slurry of blipping, dripping effects (MP3).