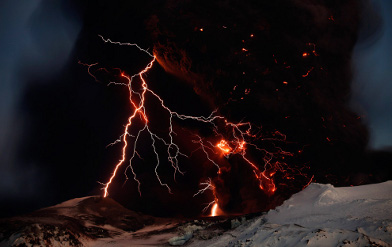 This is what Eyjafjallajökull, the fierce volcano that erupted in Iceland and grounded planes around the world, might have sounded like on a good day (MP3):

That’s not a recording of Eyjafjallajökull itself, but of a different volcano, on Mount Yasur on Tanna Island in Vanuatu in the Pacific Ocean, made by sound artist Andreas Bick. Bick writes about his experience on the lip of the volcano as follows:

I had the chance to go to the rim of the volcano for three nights and to stay longer then the tourist crowds who would have spoiled the recordings with their “aahs”and “oohs”. Suffice to say that it was a bone-chilling and mesmerizing experience which is not really carried along with this uncompressed and raw sound recording if heard at normal level ”“ so please turn up the volume for a bigger effect (and imgine the smell of sulfer crawling up your nose)”¦ During my stay on the island, Mt. Yasur was on a low activity level ”“ the breathing of the volcano almost feels peaceful, like a hyperventilating giant with occasional sighs and coughs.

The recording is a mix of rough wind and occasional eruptions that sound like hard breezes hitting large sheets of plastic, or cold waves breaking against a concrete shoreline.

Back in March 2009, Bick’s work with the droning room tones of the Holocaust Tower at the Jewish Museum in Berlin was covered here: disquiet.com.