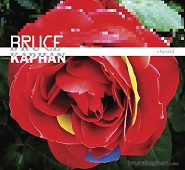 Now, pedal steel players are known for being — wait for the bad joke — slack, but it’s been nearly 10 full years since the estimable Bruce Kaphan released his remarkable solo debut album, Slider. As a member of the band American Music Club, he’d helped cement that group’s ethereal Northern California sound, and on his own he ventured deep into amber waves of slowly undulating audio. From advance description, his belated follow-up, titled Hybrid, due out June 1, is a denser, more varied affair, featuring a host of guest musicians. An initial track has been made available for preview, “Gleaming Towers,” which places his slow soloing above an even slower bass line, light drumming, and layers of atmospheric foundation, as it were (MP3).

Kaphan knows well what he accomplished on Slider, and he warns fans of that album that the new Hybrid may seem less consistent, and therefore may not provide same experience of Slider, but judging by “Gleaming Towers,” it’ll certainly be worth checking out.

One thing that won’t surprise longtime Kaphan listeners is the thoughtfulness that he brings to his creations. Every track on the album is accompanied, on his website, by lengthy annotation, including “Gleaming Towers” (brucekaphan.com), whose genesis he explains in detail. He also directs readers to myspace.com/tbrucebowers, where Bruce Bowers, with whom he appears to have created “Gleaming Towers,” has his own version of the song (under the name “Harvest”).