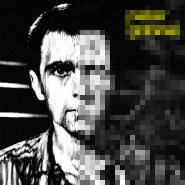 Maybe the track was selected for a remix contest because its title suggests that the act of playing can be intrinsic to an exploratory, next-generation approach. Or perhaps the track was selected because it is one of the most spare in the musician’s expansive catalog, its individual parts so separate in the original mix that they already suggested themselves as musical Lego pieces, just waiting to be re-purposed. In either case, Peter Gabriel has offered up the constituent parts of the song “Games without Frontiers,” off his third solo album, now 30 years old, for free download. He’s done so with the understanding that fans and aspiring Steve Lillywhites will take the material and shape it in their own, three-decades-hence image.

The promotion is related to Scratch My Back, Gabriel’s current project, in which he covers the songs of other musicians, and in time they cover his (among the mutual appreciation society members are Radiohead, Magnetic Fields, and Lou Reed). This phrase, “scratch my back,” isn’t a bad mantra for the post-monetary economy of copyleft music sharing and collaboration in a Creative Commons environment.

For remixers, aspiring and otherwise, the track offers six constituent parts: “Lead Vocal,” “Backing Voz,” “Bass,” “Guitars,” “Percussion,” and “Synths.” But as with many (if not all) such remix offerings, at least one of those tracks is listenable to unto itself. This would be “Percussion,” which runs the full length of the song (many other tracks drop in and out, their subtractive presence adding to the song’s overall sparseness), and has the sci-fi amalgam of proto-industrial techno and Bo Diddley that made the track so enticing in the first place.

The service requires registration, so I can’t link to the file directly (it’s a WAV, not an MP3), so check it out at the hosting service, indaba.com, an online space for collaborative music-making, which also provides its own remixing software.