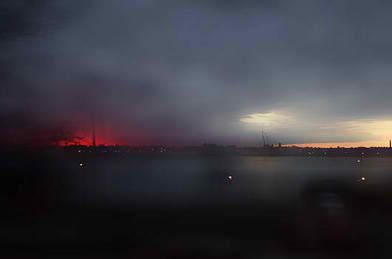 Direwires‘ release Insomnia’s Grin/Sleep Reprieve is not as dire as it sounds, but certainly as wired. It’s also the rare piece of music for which a thorough reviewer risks complaints of revealing a spoiler.

Ontario, Canada-based Direwire (born Adam W. Young) recommends headphones. This is as much, one imagines, for the stereo play, the way sounds ping back and forth across the continuum that connects one ear and the other, as for the immersive sense of offworld weirdness, the sci-fi resonances, the overarching hints at inhuman sentience. Headphones serves as suffocation proxies.

Perhaps more than offworld, this is offworld-weary: muffled, rank, troubled. Those words are compliments, they are descriptions invoked by cues purposefully placed in the music. Its two sections are clearly divided, moving from the burbling-vat sounds of the first half to the vapor trails of the second, the beat reduced to an occasional, life-confirming blip. It’s more sound design than music, consisting of synthesized whirring that gives way to a surprisingly life-affirming aura, complete with birdsong, like some Eden discovered at the end of a dark alien tunnel. That is not at all what’s expected after what preceded it, and the pursuit of narrative-based music is praiseworthy, especially since that sense of if not surprise then at least of a story in motion reasserts itself on repeat listens.

At nearly half an hour in length, the single-track release is downloadable as a Zip file. More on the work at vagueterrain.net. More on Young/Direwires at direwires.com.

NB, per the liner note: “The track contains edited portions of field audio by Rob Danielson and Daniel Schiller ”“ courtesy of soundtransit.nl. Licensed under a Creative Commons License Attribution 2.0 Generic (CC BY 2.0).”