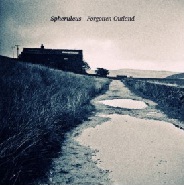 If ambient music were a Renaissance tradition, it might sound like the work of Spheruleus, aka Harry Towell. Towell, who resides in Lincolnshire, England, makes a kind of British parallel to the hazy Americana of the Boxhead Ensemble — that would be a fine comparison, or at least a more useful one, if Boxhead’s music was as widely heard as it deserves to be. Suffice to say that Boxhead make country music minus anything that resembles a riff or a melody — theirs is the froth, the aroma of country music, the rustle of used instruments left in a shed, touched gently by passing ghosts.

As heard on the three lovely tracks that comprise Forgotten Outland, available for free download on the restingbell.net netlabel, Towell’s music has none of the twangy aftertaste of the Boxhead’s work, but still has that nextworld rural jam session vibe. The instrumentation is said to include guitar, vibraphone, zither, bugle, keyboard, harmonica, trumpet, and violin, though with the exception of the violin, the ear would be hard put to necessarily identify extended passages featuring any of those particular sounds. The music is a shifting set of small gestures, as evidenced in the first track, “Wilting Bounds,” that collectively form a madrigal cumulus (MP3).

There’s something special about hearing ambient motives worked out on so-called “traditional” instrumentation, which is to say instrumentation that is mostly widely accepted to be instrumentation. It’s one thing for a synthesizer to eke out quiet filigrees of aural placidity, and quite another for those sounds to be implemented on a six string or harmonica. For whatever inherent tonal complexity those instruments bring to the situation, they also bring cultural associations