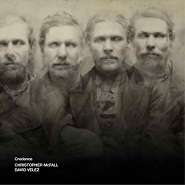 This year marks the 20th anniversary of The Difference Engine, the landmark collaborative novel by William Gibson and Bruce Sterling, who in one weighty book set the bar high for the steampunk genre. As two science fiction authors with significantly different voices and visions, they produced a book neither of them could have — or, perhaps, might even chosen to have — written independently. The novel’s unique, tandem narrative engine came to mind during a listen to Credence, the recent collaboration between Christopher McFall and David Vélez on the Impulsive Habitat netlabel. Collaboration is nothing new in music, certainly, not even in electronic music, which has more than its share of solo laptop proponents.

What’s worth paying attention to in the work of McFall and Vélez is the foundation of their efforts. There is no back beat to “Credence” (the album consists of one single, nearly 40-minute work), no riffs, no verse-chorus-verse structure. It’s a freely moving piece, wending its way between field recordings and what could, perhaps, be called “non-representational” sounds (MP3). The latter term is meant to combine synthesized tonal material and field recordings that have been manipulated beyond any easy resemblance to everyday sonic experience.

“Credence” has a strong sense of narrative, in part because the absence of song structure puts it, almost by default, closer to the realm of “program music,” in which music follows a predetermined story line. (It is thick with natural sounds, like water, and things adrift in water — or at least that’s what the imagination makes of it.) The other reason it feels story-like is because the piece sounds like the audio to a film, specifically the audio to a film during those moments when the foreground recedes, when dialogue is absent, when it’s all environmental (or foley — i.e., faux-environmental) sounds plus the imposed score. Halfway through “Credence,” for example, the mix is of rough rural noises and deep tones that sound like an orchestral section bleeding through.

Whether or not film is a reference point for the composers, it is one for the listener, who cannot help, when listening to Credence, imagining the silent story that is unfolding as it proceeds. It would be interesting to learn how the two musicians made the music, whether they had some sort of plot in mind, whether they employed some of the procedural tools employed by group improvisers (not the free-jazz kind, but the storytelling/comedy kind).

Get the full release for free download at impulsivehabitat.com. More on McFall at myspace.com/christophermcfall, and Vélez at myspace.com/lezrodaudio.