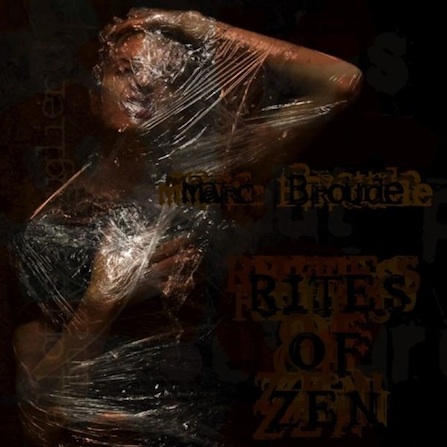 The word “drone” is not unlike the word “punk” in the way it offers to annihilate itself. But as with punk’s inherent contradictions, drones aren’t necessarily anonymous, aren’t necessarily formless, and certainly aren’t interchangeable. A drone contains sounds, and those sounds can transmit sensation, can suggest the sensibility of the artist who committed them to tape, can reference other cultural artifacts, intentionally and otherwise. The drone that is “Rites of Zen” by Marc Broude at first buries what appears to be ritual chanting in a haze of quavering noise straight out of a late-1960s BBC Radiophonic score for a science-fiction audio drama. Is it ritual, is it sci-fi romanticism, are these things set in opposition to begin with? There is drama to “Rites of Zen,” certainly, but it isn’t explicitly narrative-based. It’s an extended piece, over an hour and a quarter straight through, and to the extent that it changes it does so slowly, which means that the ear is more likely to notice changes in the short term than the long. For example, human cries dissolve into the ether. What seems like it could be ancient plainchant may, in fact, be a momentarily magnified whir of some tiny mechanism. The overarching sound, a kind of blanket hum, could be a harsh wind moving across a bleached desert, or a sine-wave sent through a modest filter. If there is a theme it may be this: Matters of scale evaporate (MP3).

Track originally posted, by the netlabel TVK, at archive.org. More on Broude at soundcloud.com/marcbroude.