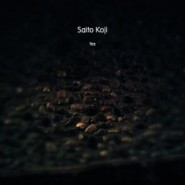 It might seem that the manner in which ambient music seeps into the background, the way it often rouses little in the way of an emotional reaction, nor is necessarily intended to, might mean that it is best experienced in small amounts, in tiny portions commensurate with its remote, modest, economical stature. But the opposite might also be the case, as evidenced by Yes, the massive new collection by Saito Koji. The press materials for the album explain that the collection, downloadable for free, is no less than five hours in length: “16 titles with a duration of 4:33 minutes each and five long forms with 39 minutes to 48 minutes.” It is rare that I write about anything at Disquiet.com without having listened to it several times, but in this case I made an exception. Despite having only dipped a pinkie toe in its vast expanse thus far, I highly recommend Koji’s immersive wonder.

What follows are but two examples of how the album’s overall sensibility of grey-flanel white noise takes on a different affect with each succsssive track. The “Yes 7” track has the vibrations of an oscillator designed to communicate with insect life (MP3). The “Yes 11” track sounds like a guitar being slowly strummed during an intensely tone-attentive pre-concert sound check (MP3). These two are among the 16 on Yes that have John Cage”“ian length of 4’33”.

More on the release at the netlabel that produced it, restingbell.net, where the full set is available for free download.