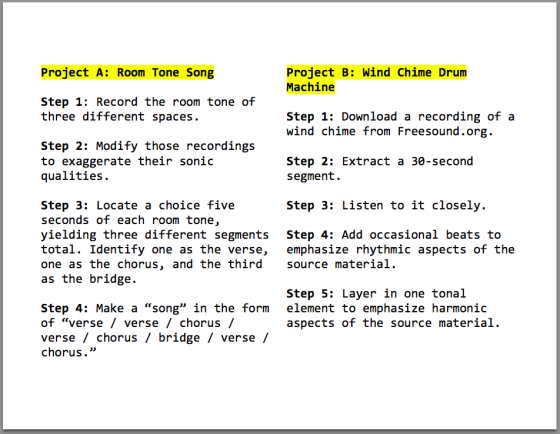 Nothing may inspire music-making quite like the fear of dropping one’s laptop in the toilet. Earlier this month I had the welcome opportunity to give a guest talk at the music department at Santa Clara University, not far south of San Francisco, where I live. It was the latest in a series of guest talks I’ve been giving, in addition to ones at Stanford’s CCRMA facility and, via Skype, at Duke. This invitation came from the talented musician Bruno Ruviaro, a professor at Santa Clara who hails from SÃ£o Paulo, Brazil.

Half my talk to his class was about my new Aphex Twin book in the 33 1/3 series, and the other half was a workshop revolving around Disquiet Junto projects — weekly composition prompts that embrace creative restraints. I brought two such projects to the workshop, both derived from past Disquiet Junto endeavors. As reproduced above, these were “Room Tone Song” and “Wind Chime Drum Machine,” the latter inspired by the track “White Blur I” on Aphex Twin’s album Selected Ambient Works Volume II. Here are four examples of student work that resulted from the class meeting, including a “wind chime” piece by Chris Rotas and three songs made from room tones by Sarah Bamberger, Heidi Hagenlocher, and Kristene Richardson. You may hear common elements in the room-tone pieces, since some of the students worked in tandem when sourcing the audio, in such places as the building’s elevator and its bathrooms: