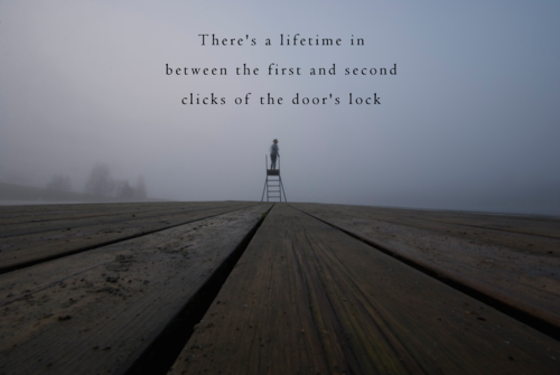 This assignment was made in the evening, California time, on Thursday, October 9, with 11:59pm on the following Monday, October 13, 2014, as the deadline.

This week’s project means participating in another music community’s project. There’s a wonderful group called Naviar Haiku, at naviarlab.tumblr.com, that does weekly projects of music inspired by haiku poems. For the group’s current project, its 40th, I wrote the haiku. It reads:

The instructions are simple:

Step 1: Please produce a short piece of music “inpsired by” the above poem.

Step 2: Post the track to the Disquiet Junto group on SoundCloud and to the Naviar Haiku group, which is at:

Include the first line of the haiku as the title of the track.

Step 3: Listen to and comment on tracks uploaded by your fellow participants.

Bonus Step: Include the sound of a door lock in your piece.

Length: Your finished work should be between one and four minutes long.

Title/Tag: When adding your track to the Disquiet Junto group on Soundcloud.com, please include the term “disquiet0145-theresalifetimein” in the title of your track, and as a tag for your track.

More on this 145th Disquiet Junto project — “Make a short piece of music inspired by a provided verse” — at:

Image associated with this project by Geir Tønnessen: