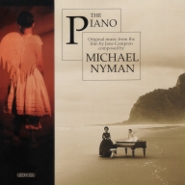 Michael Nyman came of age as a classical composer in the radical London of the late ’60s. His work embraces multiple vernaculars (jazz, avant-garde, conceptual art) and helped cement the foundation of what came to be known as minimalism. Decades into his career, Nyman’s score to Jane Campion’s film The Piano made him a star. The movie’s themes of colonialism and silence (its protagonist, portrayed by Holly Hunter, cannot speak) were perfectly aligned with his longtime interests in world and ambient music. Horn players assist members of the Munich Philharmonic Orchestra in fleshing out Nyman’s stately, hymn-like motifs. On the more heavily orchestrated cues, sentimentality wins out over minimalist restraint; the best tracks feature Nyman on solo piano, playing the rudimentary, faux period repertoire of Hunter’s character.

Date of publication is rough approximation; review written for Amazon.com long after the release of the album.