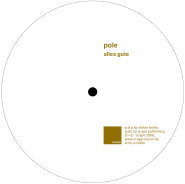 Few acts have melded digital production with dub as seamlessly as Pole (aka German musician Stefan Betke). His lanky works have mixed snare shots and pixel-precise percussion, deep echo and techno flourishes, gurgling melodic snippets and minimalist simplicity for a decade now: 2008 marks the 10th anniversary of Pole’s debut, 1, aka “the blue one.” Last year saw the excellent Steingarten and its associated remix collection, and there will be a 12″ by the end of this year, titled “alles gute / alles klar,” half of which is available for free download from the releasing label, ~scape (MP3, scape-music.com). The song appeared previously on the ~scape compilation CD Round Black Ghosts, and it brings to mind the song-form explorations of Grassy Knoll and the classic ersatz Afrobeat of My Life in the Bush of Ghosts. It’s a tremendous track, with slurply bass lines lurking below the expertly programmed drum-machine beats. More at myspace.com/poleartist and pole-music.com; relatively recent interview at zero-inch.com.