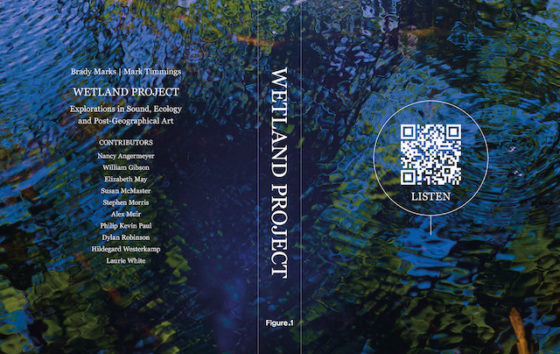 A science fiction novelist, a sound artist, and a Member of Parliament walk into a marsh — and that’s not the set-up for a joke. It’s the modus operandi of the beautifully designed multimedia book Wetland Project: Explorations in Sound, Ecology and Post-Geographical Art.

Nor is that aforementioned trio — cyberpunk legend William Gibson, World Soundscape veteran Hildegard Westerkamp and former Canadian Green Party leader Elizabeth May – the first to enter the marsh. The book collects their writings alongside work from poets and various scholars, all the contributors following in the figurative footsteps of its two editors, the artists Brady Marks and Mark Timmings.

In 2016 Marks and Timmings founded the Wetland Project at a bog on one of the Gulf Islands near Vancouver, British Columbia. They brought along microphones to document the place’s teeming biodiversity, thus blurring the line between sound art and acoustic ecology.

Since then, their Wetland Project has encompassed a plurality of approaches, including a 24 hour audio document from 2016 (done with Eric Lamontagne), transcriptions for musicians, an installation with Gabrielle Odowichuk that algorithmically associates sound frequencies with colours, and an annual “slow radio” broadcast in commemoration of Earth Day. This book is simply the latest way their Wetland Project has flowed.

And of course, before Marks and Timmings came, First Nations people populated the region in advance of the arrival of Western settlers. One descendant, poet Philip Kevin Paul, talks here about how a tape recorder risks severing sound from the circumstances in which it originated. Elsewhere in the book Laurie White warns the reader against listening to nature in a manner that “risks over-determining a narrative of loss.” Dylan Robinson, like Paul of First Nations ancestry, connects their concerns in an essay that takes arrival, in all its forms, as its theme. Gibson contrasts the broader Wetland Project with the techno-quixotic aspirations of virtual reality. And the late Stephen Morris, to whom the book is dedicated, maps everyday sound to formal compositions via concepts dating from the Renaissance. Over ten percent of Wetland Project’s pages contain sheet music resulting from Morris’s approach.

There’s also poetry from Susan McMaster, geochemical consciousnessraising from May, and colour – lots of colour. The book is a veritable peacock, each page a different solid hue, drawing from Odowichuk’s algorithms, expressing a sound from the marsh. The result is a sort of reverse sonification.

And there are QR codes. These appear here and there to allow the reader to click through via a phone camera and hear specific instances from the marsh. On the one hand, the sounds are central to the overall topic. On the other, the QR codes are inelegant, even intrusive; going back and forth between the book and one’s phone can break the concentration the endeavour deserves.

But the QR-triggered webpages are beautiful. They throb and glitch according to the given sounds. One for the red-winged blackbird’s chirp lights up with synchronised flashes. The longer it plays, the more you realise the colours aren’t uniformly bright or dark; between each high-pitched peak appear myriad shades, each for a quieter order of presence. You stop hearing the chirp, and listen out for what’s in the background. Nothing could be more true to the spirit of Wetland Project.

This originally appeared, in slightly different form, in the January 2023 edition of The Wire. More on the book at figure1publishing.com. 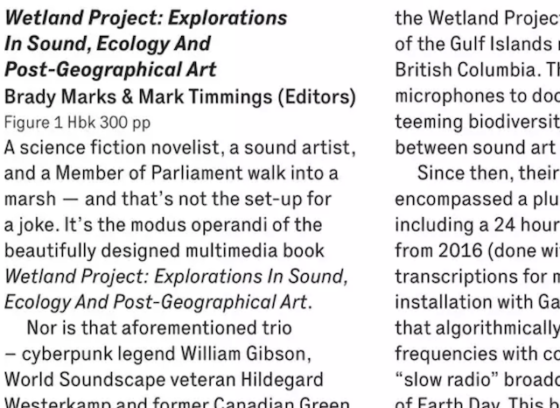 My review of the new book Wetland Project — which features writing by William Gibson, Hildegard Westerkamp, Elizabeth May, Philip Kevin Paul, and Susan McMaster, among others — is in the new (January 2023) issue of The Wire. Snippet here. Paywalled. (And major thanks to Bruce Levenstein, who told me about the book in the first place.) More at wetlandproject.com and figure1publishing.com.

I spent Friday, which we had off for Veterans Day, across the bridge in Oakland at one of the Bay area’s many excellent museums, in this case the somewhat awkwardly named Oakland Museum of California, which is housed in one of the most playful brutalist structures I’ve ever had the pleasure of learning the ins and outs of over the years.

The museum is very much “of California.” While it contains, and displays, a lot of art, it is as much a history museum. And while it is a history-oriented institution, with an engaging permanent section dedicated to the state’s deep, broad, and — by some relative measures — brief through lines, it is also a visually motivated institution. Which is to say, the current Angela Davis — Seize the Time exhibit (running through June 11, 2023) is as much about an icon — emphasis on that eclipsing silhouette of hair — as it is about the lived experience of a transformative political figure. To that end, Seize the Time mixes art about and related to Davis (paintings, prints, photographs, video, installations) with artifacts from her own life (news footage, publications, posters, video, interviews).

And there is a lot of sound, so much so that individual galleries within the Seize the Time exhibit have both a speaker and headphones, so visitors can separate the different pieces of work.

A favorite piece of mine was Reading Women (Angela Davis/Prison Abolition Edit), a short film by Carrie Schneider projected on one of the museum walls. Just under seven minutes in length, the film presents carefully edited footage of women reading. And that’s it. They’re reading Davis’ books, and they sit, in the plain light of day, with the physical object in hand, turning the page, taking it in, reflecting, and turning another page.

Throughout, there is the natural sound of the moments: fingers on paper, the odd hmmm, a piece of paper moving, a seat being adjusted — and, of course, the great emotional barometer known as room tone. We listen to the rooms in which these women sit as much as we watch the women.

Reading Women reminded me a bit of some of Yoko Ono’s video art, and Andy Warhol’s, which can focus on quotidian instances. But Ono and Warhol are powerful — perhaps instinctual — visual designers, whereas Schneider is much more interested in the naturalist intimacy of the moment. Reading Women isn’t a documentary in any way, but it’s also more than a document. It’s documentarian in the manner by which it captures these moments, and maps contrasts and parallels while different eyes, different faces, different minds, respond to similar words.

It’s unfortunate that of the pieces in the Angela Davis show, Reading Women is one that is presented with speakers instead of headphones, because the sounds are so subtle. But if you can make it to the museum on a weekday, when there’s no one else around, this is a vicarious book club you’ll want to join for sure.

The new book Wetland Project: Explorations in Sound, Ecology and Post-Geographical Art is almost as remarkable for the variety of its contributors as for the deep attention it pays to the natural environment. The gorgeous and highly colorful volume includes work by science fiction novelist William Gibson (an adaptation of whose The Peripheral just hit Amazon Prime, and I will be watching shortly!), sound artist Hildegard Westerkamp, Canadian Member of Parliament Elizabeth May, poet Susan McMaster, and the late scholar Stephen Morris, among others, all arranged by Brady Marks and Mark Timmings.

The book (available for sale from the publisher Figure 1 — with, to be clear, no commission or kickback for me) is a manifestation of Marks’ and Timmings’ ongoing creative efforts engaging with the sounds of the ṮEḴTEḴSEN marsh, in W̱SÁNEĆ territory (Saturna Island, British Columbia), more on which at wetlandproject.com. I’m not completely done reading Wetland Project — I received an advance copy, and will be writing a proper review of it soon — nor am I done listening to all the complementary audio field recordings triggered from little QR codes embedded throughout the book, but I wanted to make sure folks know about it. (And thanks to Bruce Levenstein for making me aware of it!)

Just last week I mentioned the story of an American Airlines flight emitting “bizarre” noise on its intercom. Now shoppers in British town of Middlesbrough “thought they were hearing things when speakers linked to the CCTV system started to make seemingly nonsensical broadcasts.” The audio included morning greetings and an unidentified voice of authority saying, “We intend to unite and level up across the whole of our United Kingdom.”

As it turned out, this wasn’t an unidentifiable phenomena, but an installation by Olivia Louvel, a French-born artist pursuing a PhD (“investigating the interplay of voice and sculpture”) at the University of Brighton: “On dedicated sites in the centre of town passers-by will hear political slogans, news headlines — read by the AI voice ‘Kate’ — and the sounds of protest, reflecting the current state of political affairs in Britain.” More from Louvel at olivialouvel.com.