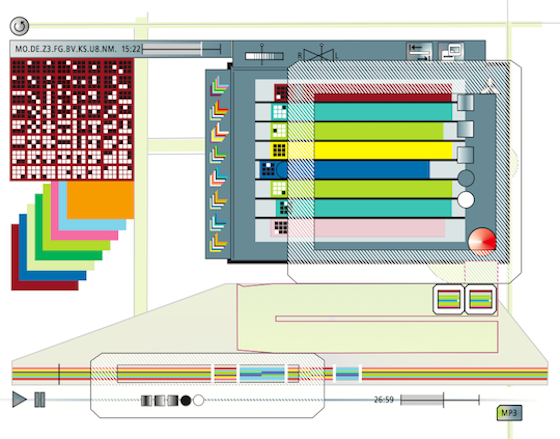 I’ve learned that the publication Art Practical is no more. I used to read it regularly, but only contributed once, back in April 2012. I’m posting the full text of my piece, “Sonic Infrastructure,” here for archival purposes. The essay was part of an issue devoted to sound. The issue included an introduction by Tess Thackara (who invited me to contribute), an interview with Paul DeMarinis by Renny Pritikin, a discussion between artists Joshua Churchill and Chris Duncan, Matt Sussman on Infrasound, Liz Glass on the Tape Music Center, an interview with Jacqueline Gordon by Ellen Tani, a profile of Ethan Rose by Bean Gilsdorf, a discussion about the Invisible Relics exhibit at Park Life (a gallery in the San Francisco neighborhood I have long called home, the Richmond District), and an essay by Aaron Harbour drawing from his experience as a curator and DJ.

So, a sound artist walks into a chamber …

This joke-without-a-punch-line likely brings to mind the archetypal sound-exploration incident in which composer John Cage famously entered the confines of an anechoic chamber in pursuit of pure silence. As the oft-told (and, some have argued, perhaps apocryphal) story goes, Cage did not experience the silence he had led himself to expect. Instead, he heard something—two things, in fact: his heartbeat and his nervous system.

But there’s another chamber worth talking about, one with increasing prominence in the sonic arts: it’s called the ambisonic chamber. In contrast with the sonic exclusion one finds in an anechoic chamber, an ambisonic chamber produces absolute sonic immersion. It employs numerous speakers to reproduce not mere stereo sound or even 5.1-surround sound, but 360-degree sound. For example, a stationary ambisonic recording made in San Francisco’s Union Square at noon on the last shopping day before Christmas would reproduce the fully immersive experience of sound: the distant rattling of the Salvation Army bells, the “ho-ho-ho” of the Macy’s Santa, the multilingual voices of shoppers passing from and in every direction, the whir of news helicopters hovering overhead, and the rumble of skateboards passing underfoot.

Should you have the opportunity to enter an ambisonic chamber and happen to hear your heart pounding, it’s simply the result of an emotional response to the sheer imaginary promise inherent in such an installation. And, perhaps, the momentary desire to install such a thing in your living room.

A fully functioning ambisonic chamber is the heart of the SoundLab at Arup, an engineering consultancy with offices in San Francisco and dozens of other cities around the planet. Arup describes its ambisonic room as “a controlled auralization environment that allows clients to experience and compare the acoustic performance of various design options.” The SoundLab doesn’t merely reproduce ambisonic recordings; it allows for computer systems to manipulate them, adjusting the recordings based on hypothetical physical environments. It is essentially the CAD of sound.

There are such ambisonic labs in more than half a dozen different Arup city offices, including not only San Francisco but also Manhattan, Los Angeles, London, and Hong Kong. The rooms serve consulting acoustic engineers in a wide variety of endeavors, from confirming that a proposed physical sound barrier will limit the noise produced by nearby mass transportation to tweaking the architectural design of retrofitted concert auditoriums.

Such traditional engineering applications are, however, merely the beginning. As with the SoundLabs in its peer cities, the San Francisco Arup SoundLab, located in the company’s offices in the JPMorgan Chase Building on Mission near Second Street, is increasingly a source of sonic infrastructure for the arts. Shane Myrbeck, a musician, sound artist, and Arup employee, recently gave me a tour of the lab and a thorough overview of its implications for the arts. By way of example, he played me a piece of classical music as it would sound in a half dozen different venues from Vienna to Boston; the system flipped seamlessly from one to the next and back again. When I mentioned that the ambisonic chamber is like some sonic version of the Star Trek holodeck, Myrbeck said that an Arup colleague of his routinely refers to the room as such.

Bill Fontana’s Sonic Shadows (2010), installed on the catwalk atop SFMOMA’s atrium, was developed utilizing virtual, computer-design test runs in the Arup lab. The work takes sounds from inside the museum’s physical plant and reproduces them as sound art. The San Francisco office also assisted Arup’s New York office in several projects, including an ambisonic recording of a live 2009 performance by Lou Reed with guest saxophonist John Zorn of Reed’s Metal Machine Music (1975), as well as preparation for a Marina Rosenfeld performance at the Park Avenue Armory in Manhattan. (They helped her plan how to best make use of the space for a performance of her Teenage Lontano [2008] as part of the 2008 Whitney Biennial.) An Arup office also documented the ill-fated Ai Weiwei installation Sunflower Seeds (2010) at the Tate Modern in London with the intent to have visitors step on the one-hundred-million hand-crafted seeds, but that interactive element was cancelled after concerns arose about noxious porcelain dust.

The San Francisco Arup office is also working to build connections directly to the local arts community. Arup’s acoustic and lighting departments collaborated with blacksmith Jefferson Mack Metal to create Sent Forth (2011), an imaginary sonic time machine currently on display at Fort Mason. In late 2011, Arup allowed the ambisonic SoundLab to serve as a performance venue for a concert production by the arts organization ME’DI.ATE. The event featured the musician Greg Kowalsky and the duo Myrmyr, among others; Arup’s Myrbeck also performed.

Arup San Francisco’s SoundLab is slowly making its name alongside other long-running local institutions, most notably the music program at Mills and the Center for Computer Research in Music and Acoustics (CCRMA) department at Stanford. There’s an interesting distinction, though—San Francisco is expanding from being a sonic-arts center to being a sonic-arts-infrastructure center. Mills and CCRMA routinely produce graduates who carry elsewhere the cultural DNA of the Bay Area’s indigenous sound explorations. Arup joins a growing number of local individuals and organizations that are attracting client artists from around the globe to San Francisco to help them realize their ideas.

The Codification of Glitch

Barry Threw is one such an individual. Speaking over a dinner of Sichuan food in the Richmond District, Threw talked about the work he does at Obscura Digital. From its office in San Francisco’s Dogpatch neighborhood, Obscura, not unlike Arup, manages the technological realizations of design ideas for an international client base.

Threw also discussed his own development projects, among which are a Bluetooth-enabled “sensor bow” for Berkeley-based Keith McMillen Instruments and sampler software for an orchestral work by the Oakland-based composer Mason Bates. Threw discussed in detail his latest venture: bringing to fruition a long-planned piece of general-use sound software designed by Markus Popp. Popp, who resides in Berlin, is best known as Oval, the electronic musician whose albums, such as 94 Diskont (1995), helped bring the word “glitch” to both media studies departments and the international club scene.

Currently, Berlin has more than its share of programming brainpower. It’s home to both the music production software company Ableton and the data-sharing service SoundCloud—and as a sign of the city’s increasing prominence, the journalist and musician Peter Kirn recently relocated his CreateDigitalMusic.com there from New York. Nonetheless, Popp selected Threw to implement his software idea. The two were introduced by Naut Humon, whose surround-video/sound Recombinant Media Lab employed Threw as an engineer and developer between 2006 and 2008. OvalDNA, the Popp/Threw sound-manipulation software, will be made available online for free in conjunction with a recent Oval album by that name. The tool will allow users to rework thousands of existing audio files, free of copyright restrictions.

Threw agrees that there’s a wealth of digital engineering resources in the Bay Area supporting international artists. He also suggests that one reason local technologists enjoy collaborating with people from elsewhere is the wanting state of the major-league Bay Area arts institutions. For a region that is home to Google, Twitter, Apple, and Facebook, the artistic seasons at the San Francisco Symphony and the San Francisco Opera, as well as Cal Performances in Berkeley, are decidedly retrograde.

Back in 2008, Threw worked with Scott Snibbe on a media installation for the Beijing Olympics. And thanks to a growing suite of mobile apps and other bespoke innovations, Snibbe has become a key example of a Bay Area technologist who has helped secure the region’s reputation for providing next-generation implementation resources. His Snibbe Interactive, based on Howard Street near Seventh Street in SOMA, counts among its clients science and history museums from Mexico to France to Thailand.

As at Arup and Obscura Digital, much of Snibbe’s work involves providing somewhat behind-the-scenes support to institutions; yet sometimes credit is given where it is due. He has had perhaps his most public success this past year with the release of Björk’s Biopholia. The Icelandic techno-chanteuse engaged Snibbe not only to develop the images projected during her concert tour, but also to code a groundbreaking app for Apple’s iOS platform. The app was no mere interactive advertisement for the full-length recording. It was itself a kind of “full-length app,” as it were, with different mini-apps extrapolating interactive experiences from each of the album’s individual songs. The video-game reviewer for the New York Times called it “among the most creative, innovative and important new projects in popular culture,” and he didn’t even like the music that much.

Arup, Threw, and Snibbe are simply three examples in which San Francisco technology is the engine on which the global sonic arts increasingly run. There is plenty of precedent for the Bay Area providing sonic infrastructure to the world; the region is home to the leading sound technology firms Dolby and THX. Instruments from Don Buchla’s debut analog synthesizer (1963) to the contemporary virtual tools of Cycling 74—most notably Max/MSP—originated here. San Francisco’s current generation of innovators can easily take a drive down memory lane: along Highway 101 in Redwood City is the roadside logo of the legendary audio-storage firm Ampex, founded by Russian immigrant Alexander Michael Poniatoff back in 1944.

_____
This article originally appeared in April 2012 as part of the online publication Art Practical, which is now archived at archive.org.