This Week in Sound: A Camera That Runs on Sound Waves

These sound-studies highlights of the week originally appeared in the October 4, 2022, issue of the free Disquiet.com weekly email newsletter This Week in Sound: tinyletter.com/disquiet.

▰ What the Peck: From New Scientist: “To a woodpecker’s brain, drumming against a tree is a lot like birdsong. The findings reveal substantial similarities in the brain circuitry behind hearing and executing these two major acoustic activities in birds, meaning that they may be modifications of a shared evolutionary template.” It takes a moment for this revelation to sink in: it isn’t just that the woodpecker’s pecking registers as singing; it’s that the bird is using an external object, the tree, to accomplish that singing. “Woodpeckers don’t just use their beaks to drill for grubs inside tree trunks. They hammer against trees to make specific sound patterns that communicate territorial information with other woodpeckers.” Ironically, the classic “Woody Woodpecker Song” made the point of saying the cartoon character’s laugh was its song (“Oh, that’s the Woody Woodpecker’s tune … Makes the other woodpeckers swoon”). Turns out, the pecking was itself the song all along. ➔ newscientist.com

▰ Jet Set: “As Emerson Collins, a film producer and nonprofit director, boarded his American Airlines flight from Los Angeles to Dallas on Sept. 6, a bizarre noise from the plane’s intercom system flooded the cabin: a loud groan — or was it a moan? — laced with pain — or was it pleasure?” Read about what is definitely not the source of the Havana Syndrome, but is still quite a story about sounds of unclear origins. (Weirder still, someone says the same thing happened to them back in July, also on an American Airlines flight.) ➔ latimes.com (Thanks, Philip Sherburne!)

▰ Cop Out: “The days of eavesdropping on the New York Police Department may be coming to an end,” according to reporting by Gizmodo: “The NYPD says it wants to reimagine its current police communication system and transition to encrypted messages by 2024. … New York joins a growing list of cities considering encrypting radio communications. Denver, Baltimore, Virginia Beach, Sioux City, Iowa, and Racine, Wisconsin have all moved to implement the technology in recent years.” ➔ gizmodo.com

▰ Lost in Translation: The local newspaper from Hamilton (Ontario, Canada) reports on how “closed-captioning goofs make for bizarre reading at city council meetings.” A city spokesperson confirmed for the reporter that the broadcasts “use a voice recognition program for automated closed captioning.” ➔ thespec.com

▰ Life of Brian: Brian Eno spoke at the Woodbridge Ambient Music Festival, held in his birthplace of Suffolk. He talked a bit about how life in this town, which apparently had about 4,000 inhabitants in his youth, influenced the development of ambient music: “I remember I used to take walks towards Kyson Point [overlooking the River Deben estuary] and I used to imagine what would it be like if you could make music like a painting,” he told the BBC. ➔ bbc.com, woodbridgeambientmusicfestival.com

▰ In Sea: “What if you could photograph the deepest depths of the sea using a camera powered only by the ocean’s soundscape?” MIT scientists have devised a camera that “runs on sound waves,” apparently. “They say it can take colour photos in dark environments, and is 100,000 times more energy-efficient than other undersea cameras. … The prototype underwater camera is made up of two domes and a cylinder. One dome houses the image sensor, and the other houses the flash. … The cylinder is covered in a specialized material that allows the camera to harness sound waves and convert them into electrical energy, which it uses to power up.” Bonus out-of-this-world quote: “We’ve also been in discussions with NASA for future space missions where they want to use them to search for life in extraterrestrial oceans.” ➔ cbc.ca (Thanks, Michael Fitzgerald!)

▰ Beyond Blipverts: I hope to revisit this topic, but for the moment I’m just sharing a tweet: “A company is asking the @FEC for permission to program your phone to listen for sounds embedded in political ads that are ‘imperceptible to humans,’ and when your phone hears the sound, it’ll prompt you to make a campaign donation.” (Found via Adav Noti of the Campaign Legal Center, via the Sounding Out! blog) ➔ twitter.com, fec.gov

▰ Super Freak: Stephen Dubner uploaded an episode of the Freakonomics podcast dedicated to matters of noise, covering such topics as how recorded complaints of noise pollution date at least as far back as Roman philosopher Seneca (who “moved out of Rome to the Roman suburbs because he couldn’t stand the noise anymore”), how 19th-century philosopher Arthur Schopenhauer complained about the noise of cracking whips (“paralyzes the brain … and murders thought”), about early research on the impact of environmental sound on education, and the sometimes limited reinforcement of noise-abatement laws (“There are even prohibitions against ice-cream trucks playing their jingle once they’re parked at the curb. But, of course, there’s a big difference between having a noise code and enforcing it”). (Full disclosure: I read the transcript. I have no idea how people have enough time in their lives to listen to podcasts. More power to them.) ➔ freakonomics.com (Thanks, Rich Pettus!)

▰ Phoney Baloney: The war on robocalls proceeds. Press 1 for more information. Press 2 to donate to the cause. “State and federal officials are teaming up to collaborate on investigations to stop robocall scams. The Wisconsin Department of Justice revealed a partnership Tuesday that it’s taking part in with the Federal Communications Center, which establishes a formal sharing and cooperation structure to investigate spoofing and scam calls. ➔ weau.com

$10: Surcharge at a restaurant in Singapore for screaming children (in $U.S.)

Reviewing Robert Fripp for The Wire

Behind a paywall for now

I wrote a review of Robert Fripp’s new book, the 561-page The Guitar Circle, for the latest issue of The Wire (the one with Tyshawn Sorey on the cover). Full text is in the print and (paywall) online edition.

Ongoing exploits with the Algorithm 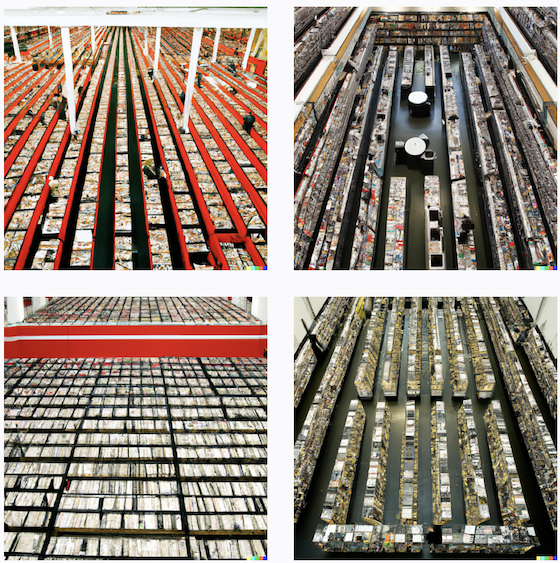 Less impressive with Andreas Gursky than with Basquiat — but still kinda cool.

Ongoing exploits with the Algorithm 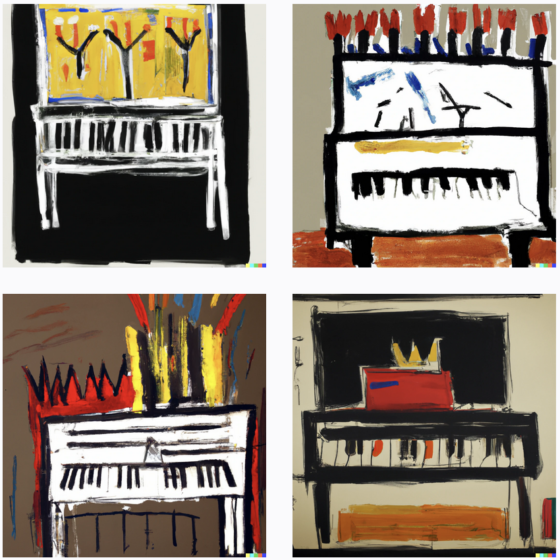 If nothing else, DALL·E 2 will have done the world a service by putting Jean-Michel Basquiat plagiarists out of business.

Prompt: “Basquiat painting of a piano”