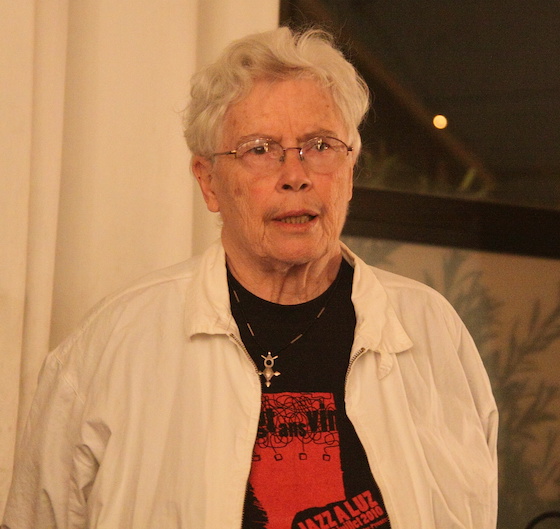 A week from this coming Monday — which is to say, December 13, 2021 — will mark the 25th anniversary of Disquiet.com. I’ll post one article highlight per day between now and then. The collection will serve as an archival ambient advent calendar. First up: a 1996 interview I did with the great musician, thinker, and teacher Pauline Oliveros: 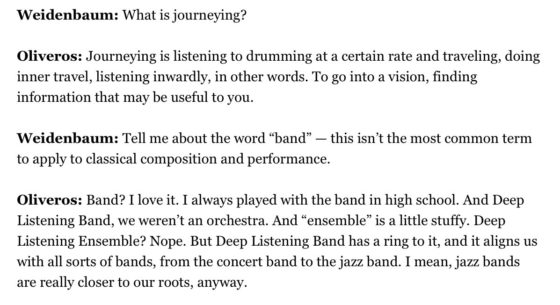 I interviewed Oliveros several times and we corresponded a bit, as well. Shortly before she died in 2016, the two of us chatted via Facebook Messenger about her proposing a project for the Disquiet Junto music community. Clearly it never got to happen. Nonetheless, many Junto projects evidence her guiding influence: her curiosity, her interest in procedure, her humor, her emphasis on collaboration, and her trademark attention to deep listening.

After the first time I interviewed her, I sent her a gift of ECM CDs recorded by Dino Saluzzi, the Argentinian bandoneon player, with whom she wasn’t yet familiar. She later told me she enjoyed them. I always dreamed of a collaboration between the two musicians. That would have been something.

I’ve initiated this Disquiet.com 25th anniversary countdown with the Oliveros piece because she was responsible for rewiring my brain, and because the interview occurred in 1996, the same year I founded this website. The interview was for Tower Records’ Pulse! magazine, where I worked full-time as an editor from 1989 to 1996, and for which I later wrote freelance. I founded the website shortly after leaving Tower employment. Just a few months passed before I realized that I missed having a music publication that I felt was part of who I was. In the absence of one, I created one.

Image of Pauline Oliveros by Canticle via Wikipedia.