A work from the exhibit Andrea Davis — Seize the Time

I spent Friday, which we had off for Veterans Day, across the bridge in Oakland at one of the Bay area’s many excellent museums, in this case the somewhat awkwardly named Oakland Museum of California, which is housed in one of the most playful brutalist structures I’ve ever had the pleasure of learning the ins and outs of over the years.

The museum is very much “of California.” While it contains, and displays, a lot of art, it is as much a history museum. And while it is a history-oriented institution, with an engaging permanent section dedicated to the state’s deep, broad, and — by some relative measures — brief through lines, it is also a visually motivated institution. Which is to say, the current Angela Davis — Seize the Time exhibit (running through June 11, 2023) is as much about an icon — emphasis on that eclipsing silhouette of hair — as it is about the lived experience of a transformative political figure. To that end, Seize the Time mixes art about and related to Davis (paintings, prints, photographs, video, installations) with artifacts from her own life (news footage, publications, posters, video, interviews).

And there is a lot of sound, so much so that individual galleries within the Seize the Time exhibit have both a speaker and headphones, so visitors can separate the different pieces of work. 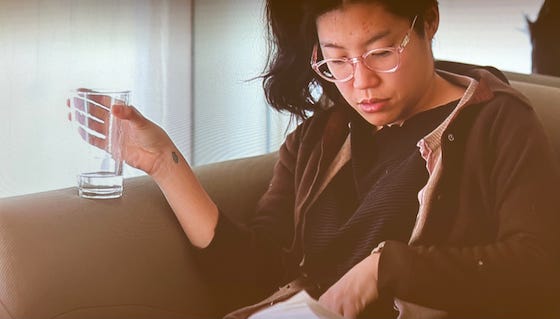 Page Turner: One of the women reading one of the books in Carrie Schneider’s Reading Women

A favorite piece of mine was Reading Women (Angela Davis/Prison Abolition Edit), a short film by Carrie Schneider projected on one of the museum walls. Just under seven minutes in length, the film presents carefully edited footage of women reading. And that’s it. They’re reading Davis’ books, and they sit, in the plain light of day, with the physical object in hand, turning the page, taking it in, reflecting, and turning another page.

Throughout, there is the natural sound of the moments: fingers on paper, the odd hmmm, a piece of paper moving, a seat being adjusted — and, of course, the great emotional barometer known as room tone. We listen to the rooms in which these women sit as much as we watch the women.

Reading Women reminded me a bit of some of Yoko Ono’s video art, and Andy Warhol’s, which can focus on quotidian instances. But Ono and Warhol are powerful — perhaps instinctual — visual designers, whereas Schneider is much more interested in the naturalist intimacy of the moment. Reading Women isn’t a documentary in any way, but it’s also more than a document. It’s documentarian in the manner by which it captures these moments, and maps contrasts and parallels while different eyes, different faces, different minds, respond to similar words.

It’s unfortunate that of the pieces in the Angela Davis show, Reading Women is one that is presented with speakers instead of headphones, because the sounds are so subtle. But if you can make it to the museum on a weekday, when there’s no one else around, this is a vicarious book club you’ll want to join for sure.