I utterly failed at making a “best of 2021” list this year, as is often the case. I just don’t make lists like I used to, and I was never much of a list maker to begin with. I really did try, but the list never came together. Instead, today, here are three strong favorites I kept going back to, all from before 2021:

▰ Ben Monder uploaded, early during the pandemic, on May 15, 2020, this video of his elegant dissection of the classic song “Never Let Me Go”:

▰ I started listening to this instrumental version of the classic Grace Jones track “Slave to the Rhythm,” produced by Trevor Horn, when Robbie Shakespeare, the great bass player, died. There is no official instrumental version, but this one, uploaded in October 2018, was constructed by a YouTuber who goes by Pacalo, and who appears to construct instrumentals for tracks that don’t have them (also check out INXS’ “Never Tear Us Apart” and Pet Shop Boys’ “Suburbia”).

▰ There’s an alternate universe where Fringe ran for a decade, and a simulation where Person of Interest is still unfolding weekly, and I’d love to visit both places.

▰ RIP, Greg Tate (October 15, 1957 – December 7, 2021). I only spoke with him a few times. He did a bit of writing for Tower Records’ Pulse! magazine when I was an editor there. Last time Greg and I spoke, in the early/mid-1990s, he was gonna write for us about Anthony Braxton’s covers of standards. I sent him the vinyl, which I’d found used at Amoeba, but then he never finished the article, which is totally fine. Life happens. I’d hoped to run into him someday and joke about it. Now that’ll never happen. His was a strong, learned voice. Glad so much is on paper and online.

And here, ’cause it’s great and now it’s on my mind, is Anthony Braxton covering John Coltrane’s “Impressions”:

And via The Wire: “By way of tribute to the author and critic we have made a number of articles Greg wrote for the magazine free to read in our online archive for the next month.”

▰ Again, nothing’s happening on the 25th anniversary of Disquiet.com. I’m just enjoying the reflective process of counting down from the start of December until the actual anniversary. I had plans. But then: pandemic. It’s OK. Stay healthy. Do your thing. Rest.

▰ So, the YouTube Music (which if you use it regularly you likely think of as Music YouTube, since the URL is music.youtube.com) soft-boiled approximation of Spotify Wrapped came out, and apparently pretty much all I listened to was the Michael Clayton soundtrack on repeat.

▰ I admit I’m no instinctive list-maker (best this, top that), or one to gauge album against album. My disinclination may relate to my disinterest in competitive sports. But I read what Marc Masters said, and I agree end-of-year lists do serve a purpose, so I’m getting one together. (That may count as whinging, but in the service of getting past it.)

Update: Or at least trying to get one together. It’s not entirely my thing.

▰ I don’t think I recognized until last night that with the gain raised high enough, an electric guitar can be plugged directly into the ER-301. 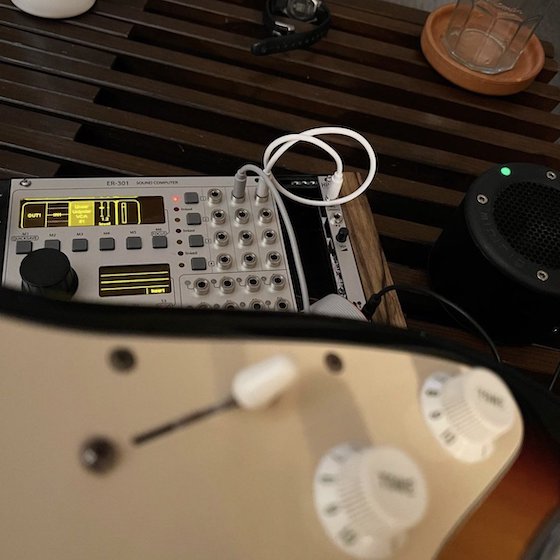 ▰ Inspiring motto on the package from the company that makes little rubberized caps to put over the blunt stiletto that emerges from the bottom of a cello. 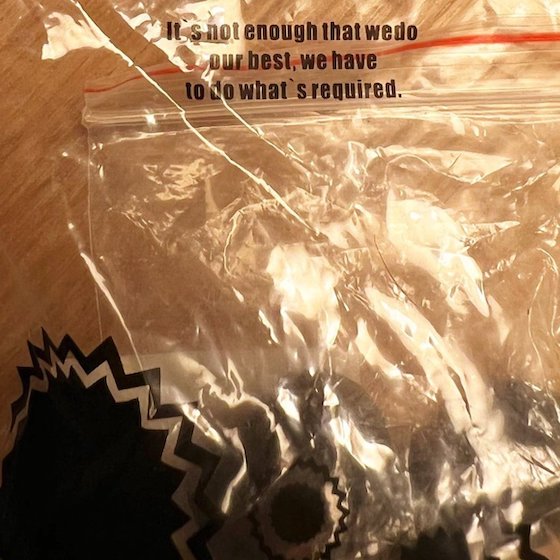 ▰ Only good thing to come of today’s news is Sly & Robbie’s music will flood the internet in the collective act mourning. Here they are with Nils Petter Molvær, Eivind Aarset, and Vladislav Delay:

And with DJ Krush “The Lost Voices,” off The Message at the Depth:

It’s weird, ’cause just last night I was listening again to the latest Aarset & Molvaer albums, and in the process I was thinking about their work with Sly & Robbie.

*Who am I kidding? More to come.

▰ “AI spokesman, avatars enter election campaigns” is the most William Gibson headline I have read this week.

▰ Occasional PSA to musicians releasing music for download on Bandcamp and elsewhere that metadata is sorta important. It’s, like, floss-your-teeth important. Speaking of which, I just typed “yumload” instead of “download” and that’s alright with me.

▰ One of these makes for a quite different morning than the others.

▰ Today in #FreshMundaneHells, what keyboard sequence did I accidentally hit that flipped my audio to just the left side? (Which took a while to sort out.) 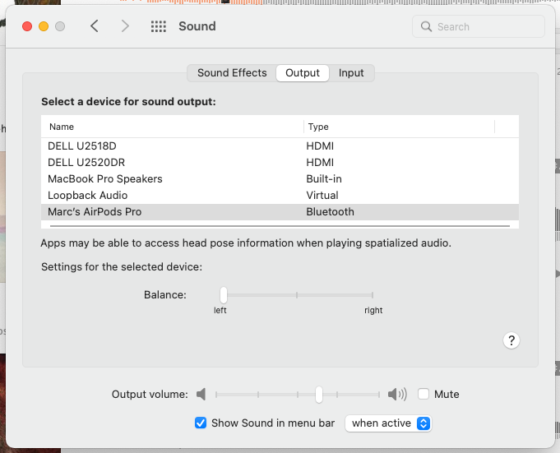 ▰ There are four Disquiet Junto projects left in the year.

▰ Honk if you watch guitar tutorials on YouTube at half speed so they’re still in tune, just an octave lower.

▰ The press prerelease copy of the score to the upcoming Matrix movie went straight to my email spam folder, which feels like a truly mundane enactment of Matrix cyber-hijinks.

Spoilers: based on a first listen, this movie will have a lot of action sequences.

▰ There he goes: “Michael Nesmith, Monkees Singer-Songwriter, Dead at 78”.

Quickly rising to top of the playlist:

In the novel Dune, we witness Paul learning to listen by observing his mother listening. As readers, we listen with her:

“She probed the farther darkness with her trained senses.

A fall of dislodged sand and faint creature sounds within it.”

“Our live set’s become increasingly complex recently; we’ve been doing stuff that’s been vastly too much information for most people to deal with and I think it’s quite interesting watching how people behave in those situations, under those circumstances.”

It’s day 3 of my archival ambient advent calendar countdown to the 25th anniversary of Disquiet.com, which was founded December 13, 1996. This interview I did with half of Autechre in 1997 is probably the most-read thing on this website (er, blog).

And at a friend’s coaxing, here’s another highlight:

Me: I think that the mathematician Joseph Fourier is a godfather of electronic music.

A video by Non Verbal Poetry

You’ll come for the “paint can kora-harp,” a makeshift version of the ancient West African string instrument, and you’ll stay for the way its pizzicato emanations — as if from dusty, aged, still tightly wound piano wire — are squelched and refracted, tweaked and echoed, by less self-evident electronic means. This is the work of Non Verbal Poetry (aka Edinburgh, Scotland-based Fen Warder), who recorded the piece by using a delay looper to process the live performance. Like the homemade string instrument, the piece of software (titled Otis, running on a device called Norns) is a hand-coded tool based on preexisting source material, in this case the Cocoquantus, a device created by Peter Blasser.

A dollar per jazz genius. Memories? Priceless, as they say.

I was cleaning out a drawer today and came upon some old concert tickets. 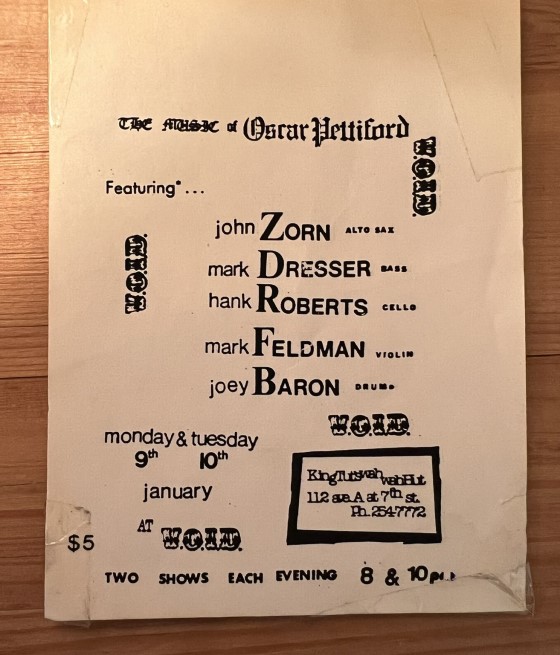 I took this one initially to be a flyer, but then realized the “void” stamps meant it was, in fact, a ticket. There’s no year listed, but it was 1989. This was at King Tut’s Wah Wah Hut at the southwest edge of Tompkins Square Park in Manhattan. I lived a half a block from Tompkins Square Park during the riot that occurred to August prior. By the time this show happened, I was either living a few blocks from the Knitting Factory, or I’d moved to Brooklyn. I’m pretty sure this concert was part of a series of events that John Zorn was curating, long before he founded his own club, the Stone. I learned today that there’s now a King Tut’s Wah Wah Hut in Glasgow, Scotland, named after this long defunct New York haunt. Hank Roberts, the evening’s cellist, was the subject of one of the first two or three articles I ever wrote professionally, right around the time of this show. The article was timed to the release of his Black Pastels album. Just five dollars for the ticket. That’s a dollar per jazz genius. 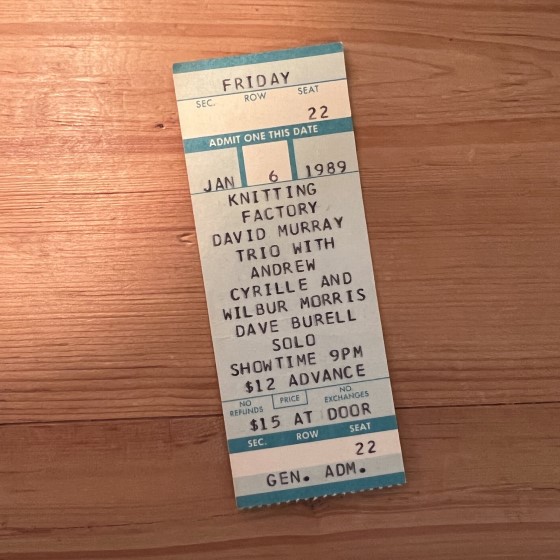 This was a phenomenal show at the Knitting Factory, where I saw more concerts at that time than all other venues in New York combined. 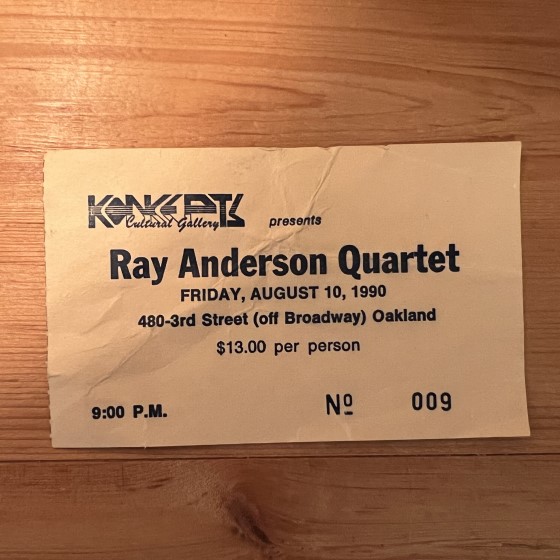 This was about a year after I moved to California (to Sacramento, to work on the music magazine, Pulse!, that Tower Records published). Ray Anderson, the great trombonist, played with a bunch of musicians who were key to the Knitting Factory scene, and catching him in California was very centering. 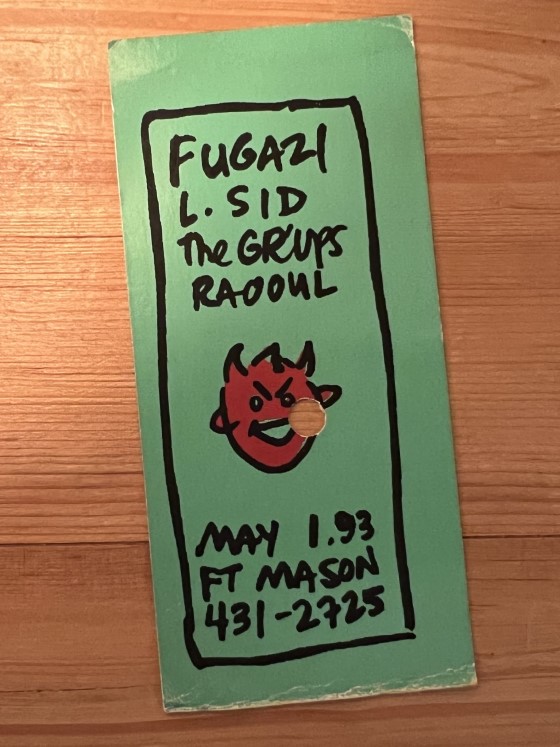 This was a few years later. I was still living in Sacramento (I wouldn’t move to San Francisco proper until midway through 1996). My vague recollection is the hall was so large you could walk away from the stage to the point where you could barely hear the band, and yet somehow still be inside the space.