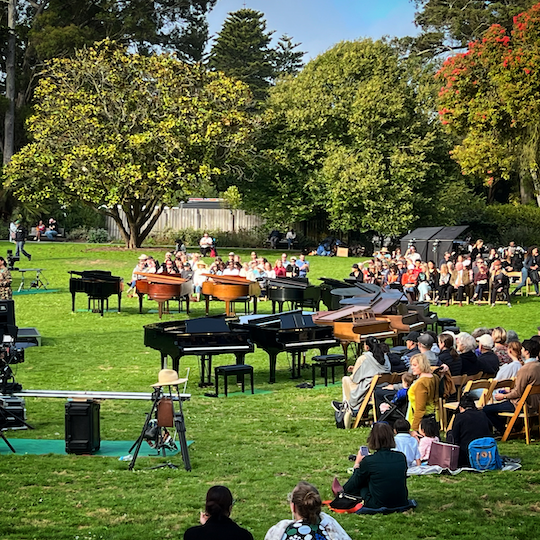 This is a photo I took on Wednesday evening, September 14, in Golden Gate Park, not far from where I live in San Francisco’s Richmond District. The occasion was the premiere of Fall and Fly, a new piece of music composed by Benjamin Gribble for a dozen pianos. The funny thing is that after the performance, several people I spoke with said the same thing. They’d assumed in advance, as had I, that the pianos would surround the audience: that we’d walk amid a landscape of keyboards and hear different things depending on our location. Instead, the pianos were grouped together in an arc, forming what felt like, in effect, one single 1,056-key instrument.

I shot this image just before the piece began. For the performance, its composer took a seat at the first piano on the left (the one fully in view above the hat that’s on top of a tripod). Gary Kamiya, Agneta Falk, and Rebecca Solnit spoke at the opening, though the sound system was such that depending on where you sat, you might not have heard much of what they said. From today, the 16th, through the 20th, the same dozen pianos will be placed throughout the Botanical Garden, and anyone can walk up and play a bit. There are also some scheduled events. Details at sfbg.org/flowerpiano. It’s a mixed blessing that this weekend there is much-needed rain in the local weather forecast. 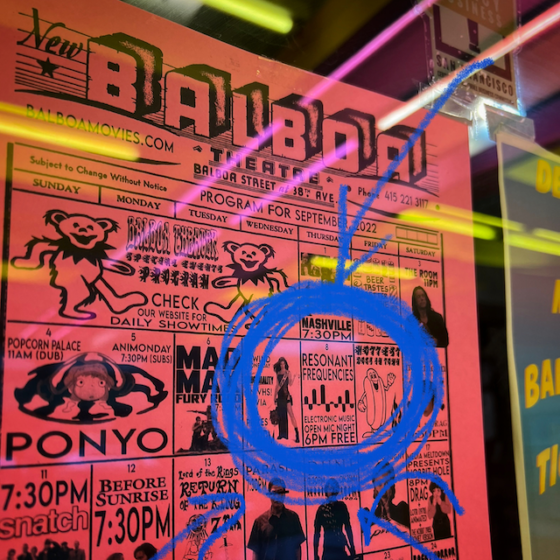 The local movie theater, the Balboa, has great film programming, including VHS screenings, archival goodness, themed festivals, and animation, plus current blockbusters. And on top of all that, it’s hosting concerts these days, including the electronic goodness that is Resonant Frequencies (details: resfreq.live).

Tobias Reber informed me this morning — or this evening, that is, in Bern, Switzerland, where Reber is based — that today marks the 30th anniversary of John Cage’s death, which occurred on August 12, 1992. The comment, via Facebook, came on the occasion of a project we’re currently undertaking, the third in a sequence of music prompts for Musikfestival Bern. This marks the fourth consecutive year of the Disquiet Junto’s collaboration with the festival, thanks to Reber’s invitation. As it turns out, the project currently underway is built on Cage (details at disquiet.com/0554). It takes a chord from a Cage composition and asks contributors to create drones based on that chord. The project began yesterday, the 11th, and will continue through this coming Monday, the 15th.

As always with Junto projects, which I’ve now been moderating for over a decade, the sheer variety of approaches by musicians has been inspiring. One participant built a system in the Pure Data coding language, while another used a different instrument for each note in the chord, and someone else played it on the beautiful Hyve touch synthsizer. The tracks are appearing one at a time on a llllllll.co discussion thread.

Cage’s death is also on my mind because I’ve been re-reading his conversations with Morton Feldman that were collected in the essential MusikTexte book Radio Happenings, a portion of which inspired another Musikfestival Bern project a few weeks ago.

It’s been a while since I thought about the one time I saw Cage in person, which must have been not long before he passed away. He sat just in front of me in the audience at a Bang on a Can Marathon performance by Margaret Leng Tan of some of his work. I could swear it was toy piano music being played, but a review by Edward Rothstein that year — the year Cage turned 80 — says it was a regular piano (see: nytimes.com). This would have been at the New York Society for Ethical Culture in Manhattan. If memory serves, I was sitting with the late K. Robert Schwarz, who died of AIDS in 1999 and had written for me when I was an editor at Tower Records’ Pulse! magazine. Also, if I’m not mistaken, Tan sat with Cage in the audience up until it was time to perform. And Cage, quite sweetly, drifted off to sleep during her performance.

Like last week’s round-up, this post is a reminder of some of the inspiring music housed at Instagram. It’s also the latest in a series of occasional answers to a frequent question: “What have you been listening to lately?” These are annotated, albeit lightly, because I don’t like reposting material without providing some context. I hope to write more about these in the future, but didn’t want to delay sharing them. 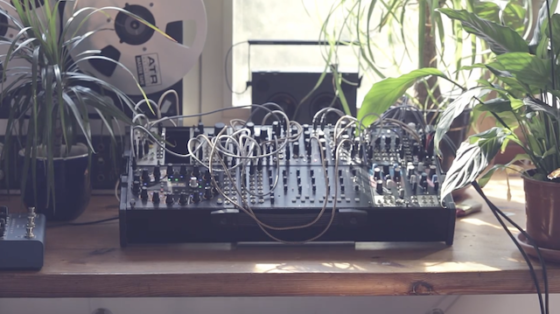 ▰ Sarah Belle Reid (instagram.com/sarahbellereid), based in Los Angeles, does incredible things with her horn, processed live by racks of synthesizer modules. As she explains, “I am constantly exploring ways to add breath and organic motion into my synth patches, looking for ways to make my oscillators blend with and play off of my trumpet more, and so on.” 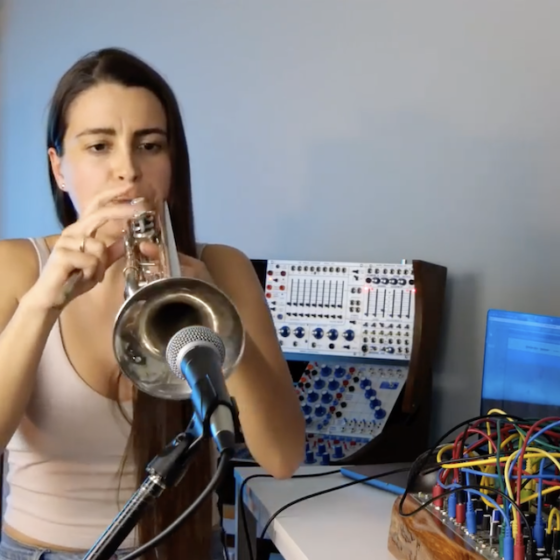 ▰ Thinking too much about the potential for something akin to a proper “metaverse” can diminish the melding of physical and virtual already in full flower. This video by Prague-based Digiklvb (instagram.com/digiklvb) combines the synthesizer seen in real life with an overlayed image that is produced by the same system. Yes, these don’t appear in the “real world” as such, except through post-production editing, but I think the increasing prominence of such combinations is a glimpse into how musicians like Digiklvb experience such work as they produce it. 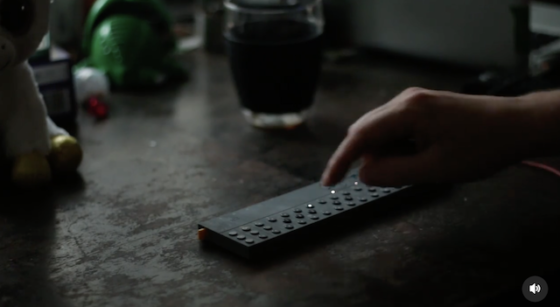 Apparently Daniel Lanois has a new album — its title, Player, Piano, featuring an attention-getting comma — due out on the fairly new label Modern Recordings (a BMG company whose roster includes Nils Petter Molvaer, Robot Koch, and Meredi). “I got to visit with the ghosts of Erik Satie and Oscar Peterson and Harold Budd,” Lanois said in a pre-release statement. This short video is a live snippet of him at his heavily used instrument, carefully selected chords worked through with soulful patience.

According to the pre-release announcement: “Lanois and [co-producer Wayne] Lorenz set about transforming each of the three pianos in the studio, dampening the strings with tea towels and dulling the percussive impact of the hammers by adding small felt pads to the heads. When it came time to record, they used vintage ribbon mics and arranged them behind the instruments rather than in front in an effort to further soften the sound.”

That glimpse at his approach explains the muted quality of the piano, the way it both echoes with a pronounced softness and yet feels constrained, controlled. The softness is itself a sort of constraint, in that it presents the piano at a remove from how one normally hears the instrument — thus the sound is both warm and alien. In other words, very much Daniel Lanois territory.