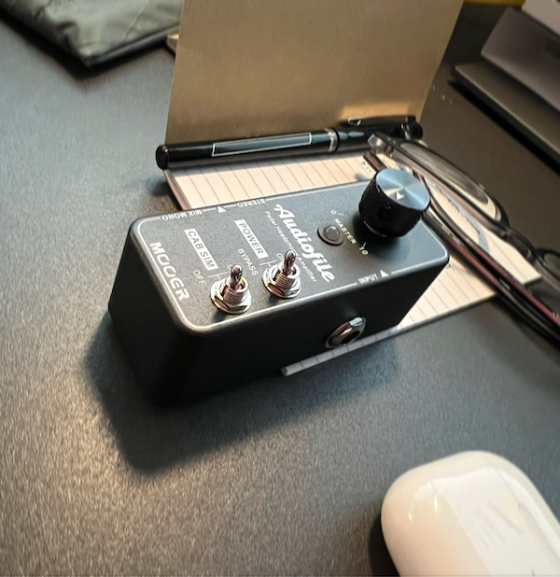 New workspace essential. Really nice. The mono mix out puts the guitar into the left and right channels, and uses a 3.5mm jack — so: right into the headphones; no adapter needed. And no, I’m not playing it loud through the headphones. This is just for practicing half an hour or so — and for not bothering other people with (currently) the minor pentatonic on repeat all over the fretboard.

An afternoon by a local lake in Golden Gate Park, traffic behind me and filtered through trees, joggers and baby carriages this way and that but not too numerous, the more prominent motors heard here not of street vehicles but of tiny little remote-controlled boats that enthusiasts bring to the manufactured water feature and race around regularly amid geese, turtles, and the occasional surface-breaching fish. The scene this past Saturday afternoon, banh mi and ebook in hand, was much more idyllic in person, I assure you. The birdsong was more prominent and diverse. The sense of space was less constrained. And the growling gusto of those hobbyist machines was significantly reduced in the context of the boats’ minuscule size.

The subway was my destination, and all the more so when I reached the top of the staircase. This was in Greenpoint, Brooklyn, last week, toward the end of a recent trip I took back east. I’ve since returned to the Bay Area, where the world is considerably less dense — with people, with activity, with sound. In Greenpoint, it seemed, in that moment — in the moment preceding this audio — like a chorus might be performing down below the surface of the city, the voices gaining heft in the twisting, tiled hallways. I was in no rush to return to Manhattan, so when I took my first step down, I was looking forward to lingering. Buskers are one thing. Buskers transformed by the cavernous sound conduit that is a subway is something else entirely.

However, as is often the case with audio illusions (or hallucinations, perhaps), the impression I had fallen prey to was dispelled the moment I reached for my phone’s record button. It’s not simply a matter that I can’t hear the chorus in the audio I recorded. It’s that I no longer heard it when I was there. It simply evaporated. But the change in atmosphere did not deter me. I continued to record as I made my way.

You can hear those footsteps, my foosteps, here. I had two pairs of footwear on the trip: sneakers that are like marshmallows, and boot-like shoes that are firm as tires. This day was a tire day, and the hard tap of each step is evident. Once upon a time, the presence of those footsteps in the recording would have disappointed me. I would have thought of evidence of my being in the place as a taint. Instead, the footsteps lend a linear context to the sounds. They confirm for a listener, even one who was not present at the time, that space is being navigated. And I was, in the end, rewarded with a voice — not a chorus, per se, but a municipal announcement so utterly altered by the echo that it became a sort of chorus itself. Perhaps the very chorus that had caught my imagination earlier on.

I was sitting in a room, perhaps like the room you are in as you read this. It was very early on April 13, 2022, and I had been listening to the city I was in, Manhattan, as it woke, and as I woke along with it. Construction had already begun by the time I lifted my head, and I hit record on my phone to capture the combination of irritant and coziness that the muffled sounds of building provided. On the one hand, these were not comforting noises. On the other, they were quite quiet, especially from my tiny, 12-floor hotel room. I thought about how much the annoyance of the sound was tied not just to the time of day, but to how the small sounds could permeate my otherwise remote and private hotel room: how the sounds could be present without being overwhelming.

And so, having recorded 45 seconds of the sound from where I was seated, at a small desk, I decided to combine the outdoor sound with itself — to, in effect, magnify it. To accomplish this task, I played the initial 45-second recording on my laptop’s speakers, and recorded it as it sounded in the hotel room, while a variation on the outdoors naturally (or unnaturally, depending on your perspective) proceeded. Then I did this layering a second time, and then a third. Each time I added sound, the result was not particularly louder, or even all that eventful. There was clanging and droning, but there was still a lot of space present, not silent space but quiet space: the room tone of the city.

At first I thought I would just upload the fourth track, but instead I made a longer recording that presented the transition from one segment to the next. I treated each of the four recordings with a fade-in, and then I concatenated them, so just before the first recording ended, the second one began, and then the third, and then the fourth. And then I faded out the fourth track, so the full piece didn’t end suddenly. It’s quite remarkable how little happens in the finished piece, how the sound combined with a variant on itself multiple times is not that much more dense, not that much more full, than was the original. It speaks to both the relative quietude of morning Manhattan, and to the way the ear processes aberrations and unwanted occurrences. This is “Construction Kit.” 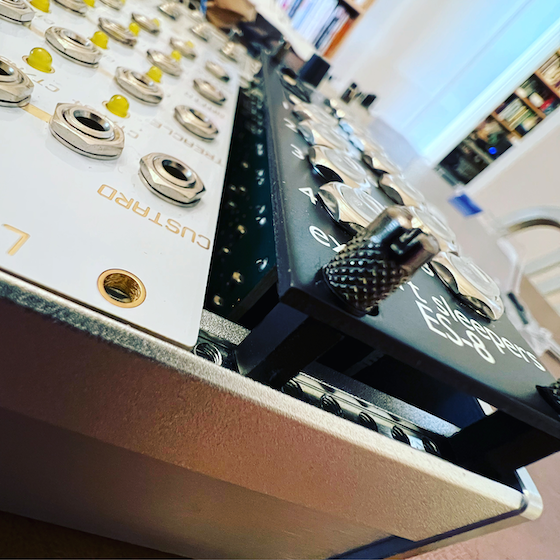 Maybe not a long-term solution, but fun to experiment with