This is an early-on trial run of a new mixer pedal I got. The pedal, the large green one in the center, provides for parallel processing of a single inbound signal. There is a send and return for each of the three channels. Each channel also has an EQ control, which allows for you to further refine which subset of the original signal is sent. I don’t employ the EQ here. Here I’m just using two of the mixer’s three channels, both going to loopers. Before one of the two loopers gets the signal, it first goes through an effects pedal. That’s the set-up.

The signal is just an electric guitar, being played with an EBow. The effects loop, the one on the left, has two layers of a random pitch feature, which makes it sound like a sample and hold patch from a synthesizer. The looper on the right is receiving the signal straight from the EBow-played guitar. I used the volume knob on the guitar to fade in and out of the swell.

All the loops were recorded and running before I recorded the video, which is why the EBow is laying there on the ground. The audio is coming from a small amplifier just to the right of the pedals. I wanted to try a more complicated set-up, but it’s been a long week and I didn’t want to get ahead of myself. More to the point, I did try a far more complicated set-up, with two additional effects pedals and a third looper, but it got to be too much. I’ll build up to it.

And that about covers what is heard and seen here. The mixer is the Electro-Harmonix Tri Parallel Mixer. The two loopers are Dittos from TC Electronic. The effects pedal is the Tensor from Red Panda. Video recorded on my phone, an iPhone 13 Pro, which clearly I’m simply holding in my hands. 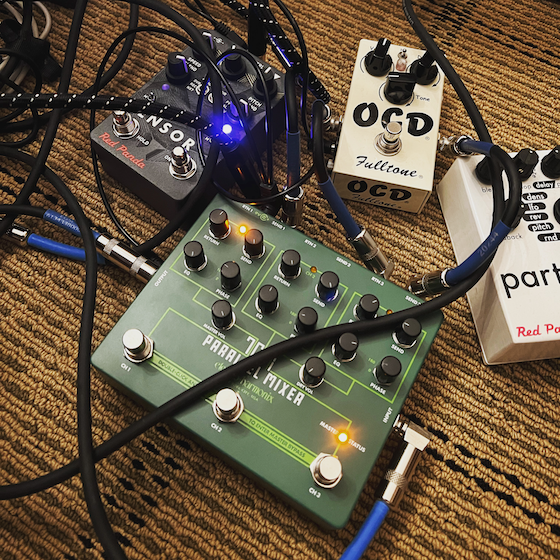 Got this new mixer earlier this week. It’s both exactly what I wanted for parallel processing (the EQ is essential for separating subsets of the inbound signal), and perhaps the final such step before I switch gears and just go full-on SaGP (which is to say: software as guitar pedal). 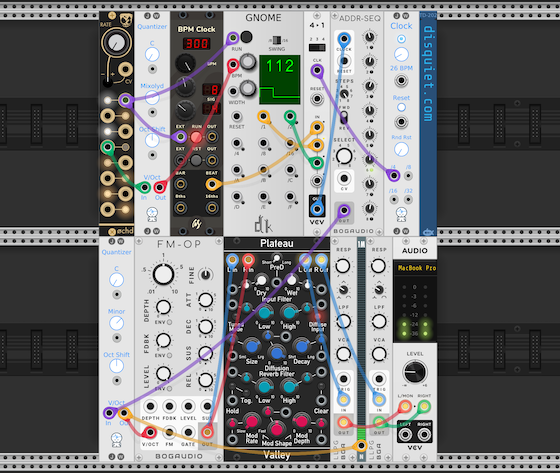 I’m gonna give the Weekly Beats series (weeklybeats.com) another go this year. It’s a great online community, one where people post their tracks and comment on each other’s. Unlike with the Disquiet Junto and other communities, there is no required compositional prompt, though folks do propose such things in the WB forums.

My first Weekly Beats recording of the year, “Three Clock Problem,” is a simple drone (yeah, yeah, arguably beat-less) I put together in VCV Rack 2. A series of quantized pitches are sent through a reverb that has a wide array of controls. Rather than one consistent clock, there are three clocks, one at a time, that are triggering the quantizing, including whether or not it’s even running. Due to the reverb’s generous spaciousness, there’s never a gap. It’s quite simple. The foundation of this originated from a patch by Omri Cohen. Recorded in Audio Hijack from the system sounds, with the fade out introduced in Audition.

With the Expression Knob 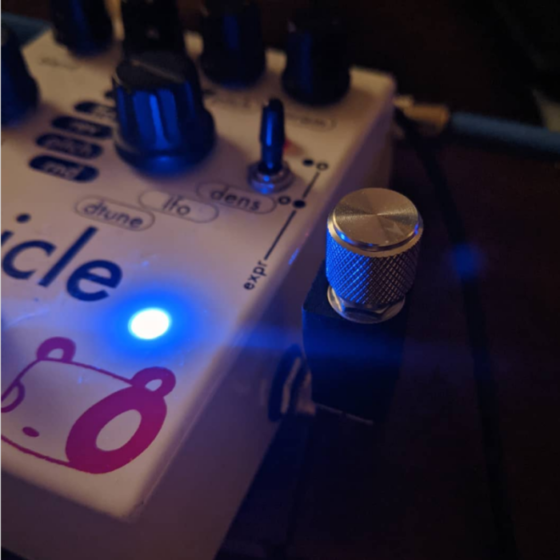 This little Expression Knob from the company El Garatge (elgaratge.com), based in Barcelona, Spain, lets you adjust a guitar pedal by hand. Last night I tried it out for the first time. It stands in, so to speak, for an expression pedal. And it’s pretty great.