1: How if I’m the first to open the refrigerator, I hear its deep descending tones as it comes out of whatever constitutes overnight mode.

2: The pop and click of ice cubes in my one daily glass of iced coffee. This specific sound, a constant in my life for 20 years or so, was on my mind for the first Disquiet Junto project.

3: The bubbling of freshly cooked oatmeal (savory, with scallions, pepper, and sometimes mushroom and garlic).

4: On days when it’s cold, the sudden air-influx whoosh of the gravity heater when the flip is switched. 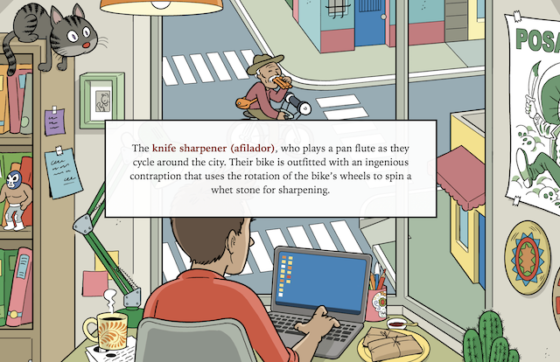 Take a virtual/interactive browser-based stroll through the sounds of Mexico City, aka Ciudad de México, aka CDMX), and learn about the sonic aspects of the “informal economy” that is street vending. “The soundscape of the city is not fixed,” the narration goes. “It changes as the city does. As services become outdated — needs and preferences evolve, residents are displaced by new waves of gentrification and development, regulations shift — sounds inevitably disappear. … Similarly, the music of organ grinders (once an iconic sound of CDMX) may soon fade from the streets, despite its promotion by local government. Organ music simply isn’t as appealing to younger generations.” Check it out ➔ pudding.cool

If you spent a lot of time in New York City, especially Manhattan, prior to September 11, 2001, the loss of the Twin Towers was literally disorienting, in a very basic way — beyond matters of global destabilization, war, the loss of human life, and impacts on society, it was disorienting at a simple, practical level. Streets are just far enough apart in Manhattan that you can’t quite make out the one above or below you from a given corner. When they were still standing, the Twin Towers meant that when you emerged from the subway, you often had a very clear sense of which way was south. In the hustle and bustle of that very busy city, knowing where you are offers a primal comfort.

Stephen Vitiello’s recordings of the creak and motion of Tower One were made in 1999 during an artist residency there. They contained very simple sounds that offered a primal discomfort, one that spoke to innate anxiety about vertiginousness and the fragility of human life.

His audio documented a different sort of critical moment from 9/11, recorded as it was amid the impact of Hurricane Floyd. Two years later, the sounds would take on a new meaning, as they provided an unforeseen, unintended homage to a suddenly imaginary quadrant of air — what was once a room 91 floors up from Wall Street was now just empty space. In the years since, Vitiello’s recording is often more associated with 9/11 than with Floyd.

I spoke with Vitiello in 2011, on the 10th anniversary of the fall of the towers, and when the occasion occurs each year, I think to mention it here. The article is titled “In the Echo of No Towers,” a nod to Art Spiegelman’s comics.

Following the events of 9/11, Vitiello initially said he had no intention of ever playing the audio again. In our conversation, he explained how he was encouraged during a subsequent event at the Kitchen to reconsider: “The feedback I got from the audience was that I had to keep them accessible but just to be careful about how they were contextualized. I took that to heart.” 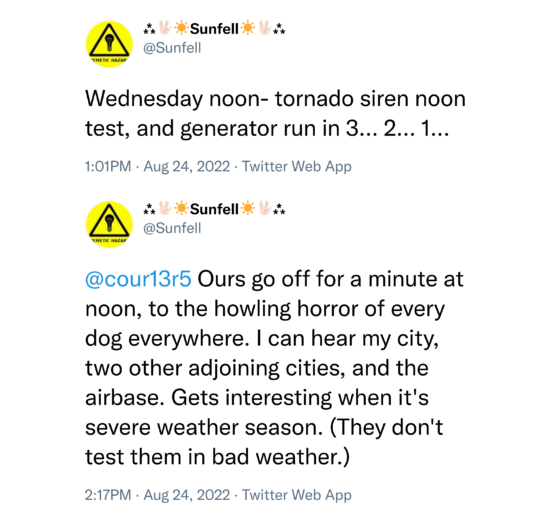 Found thanks to twitter.com/cour13r5, in response to my weekly automated tweet about the Tuesday noon siren here in San Francisco — a siren that hasn’t sounded since 2019.

I sometimes wonder if the steady stream of archival, often never before heard, ambient music from Japan is, in fact, an artful ploy, an aesthetic provocation in the form of a narrative prank — like a music-history equivalent of the Wikipedia user, Zhemao, who reportedly created an expansive fictional medieval history of Russia (see: vice.com). Also, not a prank in the Punk’d “gotcha” sense, but more in the sense of the RE/Search book, a compendium that argued they “constitute an art form and genre.”

In any case, there’s a fine new collection of historical material, Trace: Sound Design Works 1986​-​1989, out from musician Yutaka Hirose. Many of its 11 tracks have the deep, echoing resonance of sound recorded in situ, like the dubby beading of “Inner Voice,” all moist clangs and spatial ambience, and the mechanical soundscape of “Voice from Past Technology.” This physicality represents what Hirose told critic Narushi Hosoda in a Tokion interview published last month: “I wanted to build sounds based on space rather than do something musical.” Other tracks further expand the scope, allowing for seemingly virtual spaces, like the lofi beats and warped vocal of “The Breath of Cyberspace.”

Album released at the Bandcamp page of the WRWTFWW Records label.