15: Percent rise in brand awareness after a hair salon franchise employed ASMR to promote itself 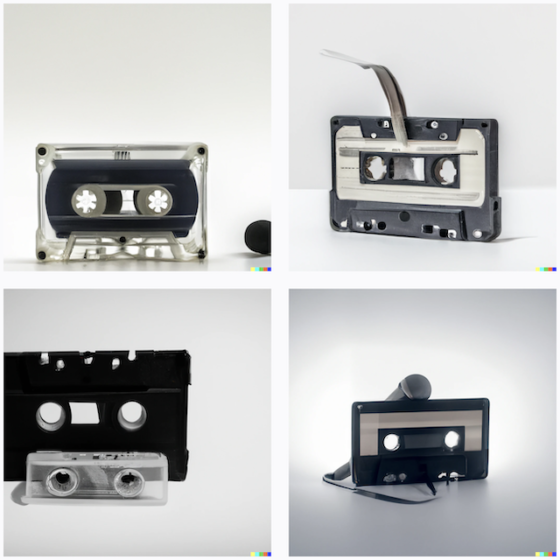 I’m fascinated when DALL·E 2 (labs.openai.com) falls short — why, for example, the concept of “hidden” seems unfamiliar to it.

The prompt: “photograph of a tape cassette with a microphone hidden inside”

The horizontal waveform has become a ubiquitous visual signifier of audio. It was popularized in particular by SoundCloud, but existed long before that in various digital audio tools, and can be tracked back further to the height of the multi-band stereo-system equalizer in the 1970s. The waveform’s deployment in a New York Times feature story this week (about intercepted phone calls home from Russian military personnel carrying out the campaign in Ukraine) turns the now generic symbol into an urgent harbinger — part surveillance sigil, part ethereal lifeline, part literal cry for help. The source of the recordings is Ukrainian law enforcement agencies, which “obtained recordings of thousands of calls that were made throughout March.” The audio is all in Russian, so the Times superimposed English translations for a broader audience. Watching the sound wave pulse has the sense of a nervous heartbeat as we read what is being spoken, such as “I didn’t know this was going to happen. They said we were going for training.” And: “I don’t want to kill any more people, especially the ones I will have to look in the eyes.”

It occurred to me after I included this in my latest issue of the This Week in Sound email newsletter that I would have loved if the Times had hired Scanner to render these with backing music.

1262: The specific California Assembly bill (AB-1262) addressing privacy in regard to voice recognition

6.2: The value, in billions of U.S. dollars, estimated for the global building acoustic insulation market by 2028

35: The percent decrease in number of species of birds sighted at the Okhla Sanctuary in India, due in part to noise pollution

Originally published in the January 10, 2022, edition of the This Week in Sound email newsletter (tinyletter.com/disquiet).

Both the album title, Microphone Permission, and the title of its lead track, “Forever Listening,” get at Jasmine Guffond’s interest in surveillance culture. The former is something we grant devices and apps without giving the decision, such as it is, much thought. The latter describes the state of tools, such as smart speakers, we allow so that they can seem to anticipate our needs. These concepts feed, in “Forever Listening,” a droning piece lace with muffled voices and occasionally riddled with something like a shot from a video game.

An accompanying video, by Ilan Katin, uses what appears to be dated footage from a security camera from a store to make its point: we’re being watched at the most mundane moments. If this tense area of study suggests a sense of alarm, Guffond meets that with the sound of one just before the track comes to a quietly vibrating close.