A lightly annotated sound-studies clipping service, collected in advance of the next issue of my This Week in Sound email newsletter (tinyletter.com/disquiet):

▰ The mother of the father of the telephone was deaf. Alexander Graham Bell’s own father developed a system called Visible Speech to facilitate communication. Bell eventually himself married a woman who had lost her hearing in childhood. And now, Katie Booth, in her new book, The Invention of Miracles: Language, Power, and Alexander Graham Bell’s Quest to End Deafness, traces this throughline in Bell’s life and work: “his creative genius and his misguided efforts to eradicate Deaf culture,” as Valerie Thompson puts it in a review. Here’s a particularly damning statement from Bell’s wife: “You are tender and gentle to deaf children, but their interest to you lies in their being deaf, not in their humanity.”
https://blogs.sciencemag.org/books/2021/04/06/the-invention-of-miracles/

▰ LinkedIn is reportedly looking to add an audio chatroom feature, which makes sense, given how much of Clubhouse, the “audio social network,” has been professional conversations. This feature expansion would be part of a broader range of changes LinkedIn is making to flesh out its social capabilities.
https://www.firstpost.com/tech/news-analysis/linkedin-confirms-that-it-is-working-on-a-clubhouse-like-audio-chatroom-feature-9483741.html

▰ Miss live music? Then I recommend this Gabriele de Seta essay on Hong Kong’s “no-venue underground” (a term credited to Rob Hayler), drawing from personal experience (2012-2016) playing in a city with few places to perform experimental music in the first place: “It is somehow ironically appropriate that, in this city without ground, experimental musicians find themselves relegated to a precarious underground actively carved out of fleeting spaces strewn across the upper floors of post-industrial peripheries. These precarious venues appear and disappear following the inexorable inflation of property prices and the investment decisions of landlords, leaving local show organizers to work in the present tense with whatever space is available at the moment.” It’s a timely, applicable piece during our moment of place-less livestreams. The essay is from the new book Fractured Scenes: Underground Music-Making in Hong Kong and East Asia, edited by Damien Charrieras and François Mouillot, both professors at universities in Hong Kong.
https://link.springer.com/chapter/10.1007/978-981-15-5913-6_7

▰ Erik Davis, author of Techgnosis and a friend of mine since college, writes about taking guitar lessons for the first time since high school. I myself started taking weekly lessons a few years ago, and can relate to this distinction he draws: “Rather than playing guitar, I am practicing with it. I don’t mean rote exercises — though I do some of those — but something more like meditation practice: a daily commitment to disciplined method and unpredictable encounter, to emotional exploration and deconstruction, to attention and listening as much as to performance or ‘doing.’” Likewise, he talks about trying to reconsider the role of recording in his efforts: “I want the recording device to become part of practice rather than ambition, no longer a staff sergeant of the Productivity Regime but a challenging feedback friend, breaking the spell to deepen it.”
https://www.burningshore.com/p/open-tunings

▰ News of Google’s Project Wolverine goes back a month, but I don’t want to lose track of it. It’s reportedly a supercharged earbud. According to a summary by Ashley Carman, “[T]hey’re currently trying to figure out how to isolate people’s voices in a crowded room or make it easier to focus on one person when overlapping conversations are happening around you.” Carman compares this with Whisper (whisper.ai), and others to the lamented, defunct Doppler Labs. As David Pierce put it in his overview of Doppler’s fall back in 2017, it “had the bad luck of being a hardware company at a time when the biggest players in tech — Microsoft, Apple, Google, Amazon, and Facebook — are all pouring billions into developing their own gadgets.” Now Google appears to be pursuing the endeavor.
https://www.theverge.com/2021/3/4/22313421/alphabet-project-x-wolverine-hearing-aid-project
https://www.businessinsider.com/google-x-alphabet-hearing-project-wolverine-codename-augmented-reality-2021-3 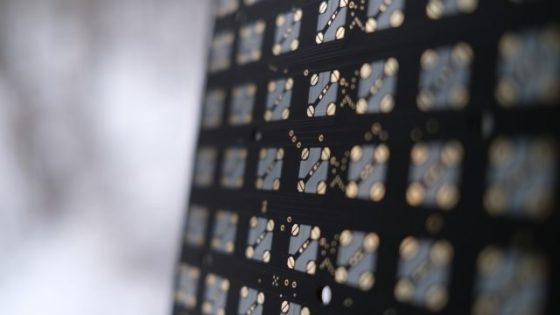 This gorgeous, shimmering image is a photo by Brian Crabtree (aka tehn) of work being done for a revised version of the Grid, a musical instrument synonymous with his company, Monome. It’s reproduced here from his blog, nnnnnnnn.co, with his permission. More on the Grid itself at monome.org.

He explained in correspondence: “it’s fundamentally a manufacturing optimization though that means it’s also 100% (literally every part) redesigned,” and “it’ll allow us to build them easier, have them be more robust and efficient, and pass on some price savings.”

Originally published in the February 1, 2021, edition of the This Week in Sound email newsletter (tinyletter.com/disquiet).

From a delightful Lullatone device

The ever-inventive Lullatone share a gizmo that’s part turntable, part children’s toy, and all manner of delight — or what Lullatone call “ambient amateur hour” in the best possible way. The device, what the Lullatone duo have named their Perpetual Melody Machine, has four bells rotating, evenly spaced, with a suspended ball bouncing between them. It’s like a wind chime benefiting from the equivalent of a most consistent wind, yet nonetheless retaining the sense of chance that gives chimes their nature-like quality.

Using simple editing techniques, the initial video is doubled, then doubled again, slowed and and reversed, resulting in variations of combinations of layers. It’s to Lullatone’s credit that not only are the individual variations entirely enjoyable, but the whole thing, almost seven minutes long, is edited together into one seamless stretch of musical economy, right up to the very end, when Shawn James Seymour, half of Lullatone (the other half being Yoshimi Tomida), reaches a hand in from off-screen, hits the off button on the turntable, and brings the spinning to a close.

The pendulum-like swing of the mallet was kind of a nod to the minimalist music of Steve Reich and Kousugi Takehisa, with the way ideas are sometimes better than finished products like John Cage, and the somnolent spinning of Alexander Calder (I had to use a thesaurus to find a good word that started with s), mixed with the playful experimentation in the “Useless Machines” of Bruno Munari.

Video originally posted at YouTube. More from Lullatone at lullatone.com.

About five minutes passed between me thinking, “I’m gonna take a break from picking up new music gadgets for a while” and someone online offering up hand-modded, circuit-bent cassette recorders that can change speed with CV input. This just arrived. (Not DIY. SEDIT: someone else did it themselves.) 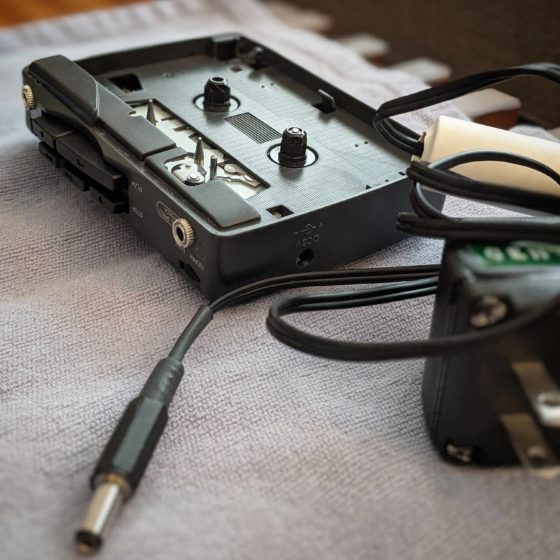 And new inputs (one for CV, the other to add audio-in, versus the preexisting microphone) require new labels: 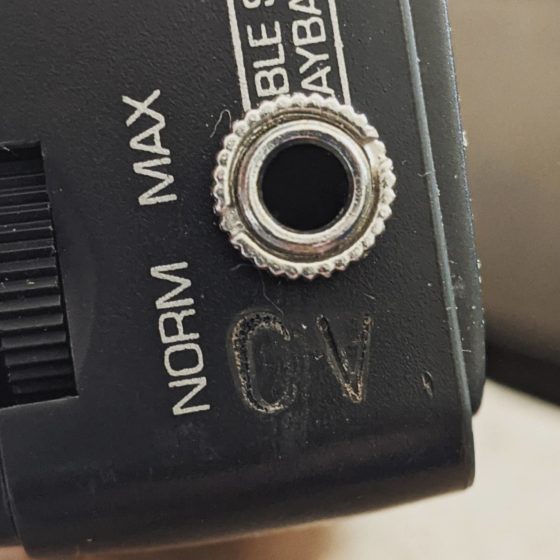 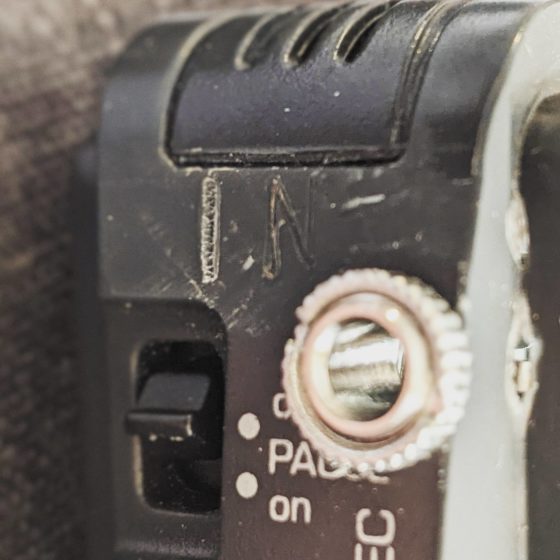