I hadn’t really recognized until this morning that Neal Stephenson’s Baroque Cycle led to the Disquiet Junto music community. When the first novel in the series came out at the start of autumn 2003, I took the day off to read. Not long in, I decided I didn’t know enough American history to appreciate it, so I put it down.

I’d read everything by Stephenson at that point, and have to this day (several of the books multiple times), with the single exception of the Baroque Cycle. In 2004 I started a job, and only picked up Quicksilver, that first book, again after the job was over, around 2009 or 2010. Again, I felt I didn’t know enough, and I put it down.

Not knowing enough about American history eventually led me to Walter Isaacson’s biography of Benjamin Franklin, which I read in advance of his 2011 book on Steve Jobs just to have a sense of how much of a hagiography the latter might prove to be.

It was while reading Isaacson’s Franklin biography that I became reacquainted with the Founding Father’s Junto club, dating from 1727, which I’d first learned of in college when his autobiography was part of an English literature course syllabus. And that led to me forming the Disquiet Junto.

Now I’m trying, again, to read the Baroque Cycle. I think I’ll make it through this time.

Originally published in the June 20, 2022, edition of the This Week in Sound email newsletter. Get it in your inbox via tinyletter.com/disquiet.

▰ I love the readymade poetry of the “notable deaths” page on Wikipedia.

▰ This is some next generation interface that seems to being tested on Twitter. I see it on occasion. Among the weird things about the now five arrows (count ‘em) is the one that seems to mean “I like it” turns red when you click on it, and the red looks more like the Defcon level has gone up.

After a while, even the word ballon starts to look like an arrow.

▰ Based on a recent show at the Oregon Shakespeare Festival, I can confirm that seeing an outdoor production of The Tempest during pouring rain qualifies as an immersive theater experience. One of my fellow attendees called it “method viewing.”

▰ I love how much The Expanse focuses attention on how the ships sound. The immediate context for this moment, from the ninth book in the series, is just how much death and destruction is occurring around the protagonists.

▰ Been down a rabbit hole for a couple weeks. Apparently YouTube has more on it than live videos of John Fahey and Bill Frisell. Who knew? means seriously. Whew. Just breathtaking stuff, Fahey in 1981.

Children's TV in the mid-1970s was awesome

A year before the arrival in theaters of a movie we’d come to call A New Hope, CBS broadcast the serial Ark II, now a mere 15-episode footnote from the Golden Age of Saturday morning television. While our current cultural moment, a Golden Age of Golden Age reboots, has arguably run its course, I’d sure welcome an opportunity to revisit and perhaps revise this short-lived bit of just-pre–Skywalker science fiction. I, then age 10, wouldn’t learn to regularly employ the four syllables that constitute “millennium” for another 12 months, but Ark II was already set a full half millennia in the future — 2476! — on an Earth so devastated by societal collapse that it could almost pass for the desert planet of Tatooine.

Not music-related, but wanted to mention it here. Read in full at:

I’d certainly like not to have to wait until whenever in the human future it is that the ninth book of the Expanse series takes place for this to be actual UI for voice dictation. There’s another voice-activity comment a little after this one, making me wonder if at least one of the authors, Daniel Abraham and Ty Franck (dba James S. A. Corey), usesd voice dictation while writing these books. 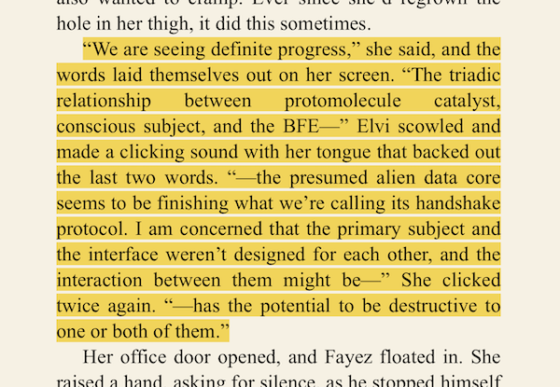 The Health of the Ship

One last trip with the Rocinante crew 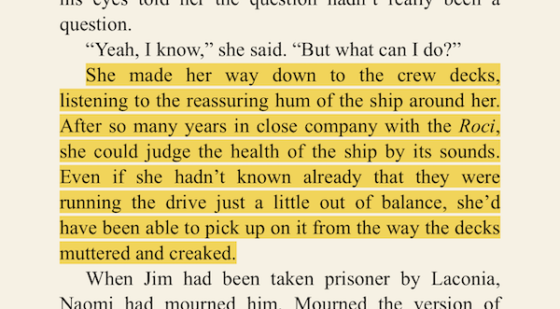 The final volume of the nine-book (not counting novellas, comics, and six-season TV show) Expanse series was high on my list for end-of-2021 reads. But as the release dates overlapped, I put the final book in the three-volume Jade series by Fonda Lee first, and after it was done, I just wanted to delay the end of another series I’ve spent so much time with. I started volume nine, Leviathan Falls, a few months ago, but still wasn’t ready to say goodbye, so I put it down. It would never be a short goodbye, anyhow, as the book weighs in at 528 pages. I finally started again at the end of May, which meant re-experiencing this moment early on, when Naomi Nagata explores the ship, the Rocinante, that has carried her and her crew mates through so many adventures. She does so by listening, and by doing so, sensorially brings the reader, as well, into the hull for one last trip.