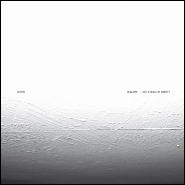 The brittle little twitches that flicker through “Mineral Hall” sound like some mischievous Morse code, some deeply buried message struggling to make itself heard, breaking out in little cracks in the otherwise startling haze (MP3).

“Mineral Hall” is one of three tracks on an album that lives up to its title, Cathedrals of Gravity by Sublamp, aka Ryan Connor of Los Angeles, on the excellent semlabel.com/iod netlabel. The other two parts of Gravity might at first sound similar, but like any seriously composed drones, they distinguish themselves over time, until what seems samey becomes indelibly separate and unique.

“Dark Matter and the Gravity Lens” mixes in raspy noise and rich tones, as if the whole thing were some organ recital recorded from outside, amid dusk bug-life (MP3). And “Glass Lashes” strives for such heights of scintillating beauty that it seems to purposefully self-destruct, yielding something fractured, as if all that questing for higher achievement just yielded broken speaker cones, which end up having a beauty unto themselves (MP3).

The flawed majesty of all three tracks play like the Icarus myth recast specifically for fans of ambient music, one in which a quest for ethereal beauty yields something earthbound but no less lovely for the effort.