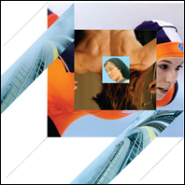 The band Growing earlier this year released All the Way, among its tracks one they opted to distribute via free download. Titled “Green Flag” (MP3), it’s the piece with which the album opens, a raucous drone, solidly in the Glenn Branca / Lou Reed school, and layered with increasingly extravagant flanging madness, eventually encompassing heavily machine-altered vocals, or what sound like they once were emitted by a human mouth. As one listens to “Green Flag” take shape, and to that shape change, it becomes difficult to track the means by which this duo found itself in this sonic space, so far from the rangy, generally pastoral, earlier efforts. But that trajectory is less important that the thoroughness of Growing’s approach to noise here. With repeated listens, the past becomes past, and the subject of concentration becomes that melodic material that struggles to make itself heard, to come into focus, as “Green Flag” comes to a close. More information at the releasing record label, Social Registry (thesocialregistry.com).