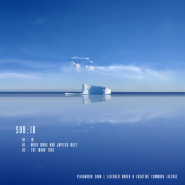 Drum’n’bass could have become chamber music, but instead it became a plug-in. Once upon a time, those ricocheting beats, along with sudden moments at which the bottom simply drops out, felt like they’d landed from some alien nightlife. But within a few years, they were serving as backing tracks to car commercials, especially once the production became routinized, and the drums and the bass started to play tertiary fiddle to synthesized chimes and florid, insta-atmospheric aural haze.

Flipping through new drum’n’bass releases these days can be a heartbreaking endeavor, but you do come across solid nuggets. Case in point, the third track off the three-song release Id by [sub], on the Plain Audio netlabel. Perhaps the title to “The Monk Tune” means that the string bass resounding midway through the seven-and-a-half-minute track was lifted from a Thelonious Monk song, but whatever the impetus for the name, [sub]’s effort shows estimable restraint, the pinging drums and sonar blips left more or less to themselves, and the percussion following its own advanced calculus (MP3). It’s a bracing track, enlivened by taut horn and string elements.

Innsbruck, Austria, is [sub]’s home base, where he runs syncopathicrecordings.com. More details on Id and “The Monk Tune” at plainaudio.com.