Guitarist Robert Fripp by 1978 had disbanded King Crimson, embarked on a series of collaborations with Brian Eno, and relocated to New York City. Eno was also in the city, and that year saw the release of his No New York compilation, on which Arto Lindsay and Ikue Mori, among others, performed. Mori herself had only recently relocated to the city, from Japan, and was then still a drummer — drum machines and laptops awaited her down the road. Kurt Munkacsi, long a key member of Philip Glass’s organization, was one of the engineers on No New York.

On February 5, 1978, Fripp made his debut as a solo performing artist at the Kitchen, long home to some of the city’s most vibrant avant-garde performing artists, including Glass, Laurie Anderson, Robert Wilson, and others. That evening marked the debut of Frippertronics, his trailblazing experiment in live looping. And a few days ago, Fripp’s website, dgmlive.com, posted a rare rehearsal recording from that very evening. At nearly three and a half minutes, the lovely solo guitar loop is marked by the slow fades, loping cadences, attenuated accrual of layers, and brief passages of rapid patterns that have long characterized his playing (MP3). The dgmlive.com site doesn’t leave up these occasional free MP3s for very long, so I recommend that you download this one at your earliest convenience.

John Rockwell, the New York Times critic, was at the Kitchen show, and his story in the paper two days later (“Pop: Robert Fripp After 3 Years”) closed with these three paragraphs describing the performance: 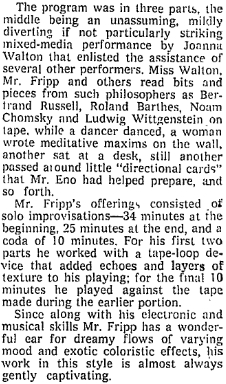 The explanatory note at dhmlive.com reads, in full:

As the title cunningly implies this piece is taken from a test loop prior to Robert’s appearance at The Kitchen Video Arts Center in New York, February 5th 1978. The date is important, marking as it does Robert’s debut as a solo performer and the first public unveiling of Frippertronics. The opening night (of two) was subject to intense interest from the public with lines spreading around the block in freezing cold weather, requiring an impromptu second performance to try and accommodate the heavy numbers of eager punters queuing up. These loops would have been prepared by Robert as test pieces and ultimately used by him to solo over.

Perhaps the full recordings of the Kitchen shows will see release some day. The venue has recently released four archival CDs, including one from around the same time as the Fripp show, featuring live performances by Martin Kalve, David Tudor, and Bill Viola. More on the Kitchen at thekitchen.org.

One thought on “Historic Frippertronics MP3 from 1978”