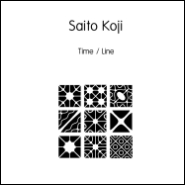 The two drones that comprise the equal halves of Saito Koji‘s Time / Line have this low-level buzz, this saw-tooth subtext, that keeps them from being ever fully capable of rendering themselves invisible. That isn’t to diminish the drone-ness of the pieces, and of the album as a whole. These are drones, thick, rich drones, with the heft of a milkshake and the gravitas of a sermon. They’re complementary more than similar, “Time” (MP3) starting off all ethereal-cloud-scape, before wandering into regressive loops of slightly off-kilter waveforms, and “Line” (MP3) just treble-y enough to veer toward a kind of subtle pain threshold.

The links above will go directly to the downloads for the individual MP3s, but because the two tracks, each at just over half an hour in length, make for a solid hour of listening, for this post’s streaming feature, I’m putting them together into one stream. (Note, though, that the little arrows allow you to move back and forth between the tracks.)