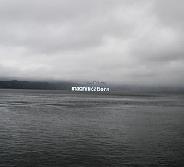 In his sweeping, cloud-bursting, widescreen solo work, Ted Laderas hides behind mounting layers of shimmering sound what is, arguably, the most distinctive component in his toolbox. One might not realize on first or second or even third listen that the reverberant tones making up the dozen tracks on Magnifications all resonate from the wooden hollow of, of all things, a cello.

The slow sawing of Laderas’s bow on the live piece “Milky”certainly brings to mind the rooted, sinewy acoustics of a cello, but the feedback-enriched haze of “Downtown Pajama”is about as far as could be imagined from the instrument beloved by such composers as J.S. Bach and Benjamin Britten. And on Magnifications, the latter listening experience is far more the norm than is the former.

Of course, Laderas doesn’t play a cello; what he plays is the Oo-Ray, a system of his own invention that places the cello amid a tidy battery of electronic tools that allow him to loop, clip, distort, and, per the title of this collection, magnify the rich overtones of his sound source. His technology doesn’t transform his cello any more than his cello serves his technology; they are partners. There is a soaring quality to “Angostura”that would be impossible to achieve without the digital effects that Laderas employs, but the piece bears no trace of CGI detritus, no green-screen lifelessness, no automated coldness.

The cello is not his instrument; the Oo-ray is his instrument. If Bach and Britten wrote suites for the solo cello, what Laderas summons up is orchestral by comparison. If those composers momentarily turned the “always a bridesmaid”figure of chamber music into a leading lady, Laderas reveals her as an angel.

Each track on Magnifications is an exercise in maximalism, that place where the teachings of minimalism — attention to tone, to repetition, and to the pleasures of incremental change — are opened wide and played to immersive effect. To listen, for example, to “If We Aren’t Blind”is to hear droning, circular patterns that bring to mind some epic experience. The saw-toothed burrs and whirring motion suggest a bellows more than they do a handful of strings. It’s all like some massive troupe of bag pipers heard from a distance as they play in a deep valley with its own immense, natural echo.

Laderas has jokingly said that he pursued the Oo-Ray in the hopes of becoming “the acoustic My Bloody Valentine,”by which he meant the rock band synonymous with the term “shoegazing,”a willfully hazy breed of pop that buried melodies behind thick, billowy screens. Of course, no matter how deeply one peers into Laderas’s plush compositions, there are no proper songs hiding behind them. What he has done is closer in approximation to some of Brian Eno’s early experiments in sound for its own sake, where that famed producer attempted to forge a pop music devoid of song-ness — to celebrate the tonalities of rock by minimizing the presence of rhythm, harmony, and melody. Laderas, likewise, has on Magnifications — from the wildly flanging madness of “Eagre”to the heart-racing extravagance of “Slow Motion Death Scene”– made shoegazing music that lifts its gaze from the stage floor and peers far off to the horizon.