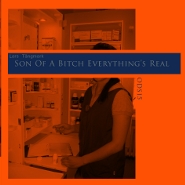 From the initial, slowed-down recording, through the industrial-pastoral aural-void that immediately follows, Lars TÃ¤ngmark‘s Son of a Bitch Everything’s Real proves to be a half-hour tour of small sounds and tight spaces and brief song-like motives, a casual mapping of gestural audio. As such, it has the feel of a combination score and soundtrack — that is, the true meaning of the word “soundtrack” — to some wordless movie. Those opening sounds, in which voices and other audio elements are evidently slowed down to half, maybe a quarter, of their original speed, seems to prepare the ear for a new approach to listening. From there, it’s all slow build, first field noise, then rough motion, then a simple tapping that eventually yields, perhaps a third of the way through the track, a rhythm — something that might be generally considered “musical.”

When an actual song-like motive appears, around the half-way point, it sounds like yet another field recording, like an old turntable playing through an open window. Eventually, the sonorous, musical activity is subsumed inside a gurgling whorl. There’s one more musical segment, a coda of organ-like held chords, but by then the impression of the overall journey has long since overshadowed any of the specific stopping points.

Balancing sounds that are commonly understood as musical alongside those that sound more real-world, such as unprocessed field recordings, let alone snatches of modified industrial noise, is a tall order, and TÃ¤ngmark uses a narrative pace to his advantage as he strings these elements into a considerable whole.