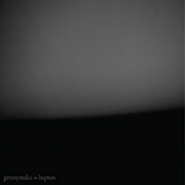 There’s no need for a Zen koan about grounded and ungrounded wires. We know full well that an ungrounded wire will make a sound — a sound not unlike the earthy drone with which Geronymakis chose to open his recent release, Hupnos, on the Dark Winter label. It’s a heavy, warm drone, very much the sort of sound that suggests a parade of diesel trucks far off in the distance, or a hovering spacecraft just overhead, or a neighbor’s oddly noisy refrigerator all too close by. And like that refrigerator, the initial Hupnos drone brings with it, over time, an added level of detail and intensity. The detail is the internal character, the sounds within the sound, that makes itself clear during the drone’s extended duration.

Note the way it seems to linger a little to the right of the stereo spectrum, the way it seems to cycle counterclockwise, the way its pulse is oblong and throaty. And in time — this single-track release is only minutes under an hour in length — additional elements join in, sonic particulate (ringing tones, nearly subsonic voices, infinitesimal percussives) attached to the drone like objects in an audio version of Katamari Damacy (MP3).