The sequencer Keston had in mind is a step sequencer, which is to say a simple grid of sound patterns. The sequencer he ended up with allowed for such variables as BPM and note length, and he posted it for general use at his website along with — for the more general listener — that sample bit of audio. While the interface for the software sequencer, reproduced below, seems complicated, it’s quite easy to picture the green grid in one’s mind as the sample clip plays out — the music quite purely is data as sound.

The audio is essentially either on or off, with minimal allowance for harmonic complexity. It begins like some rudimentary digital mechanism, before speeding up like a car easing its way from a frontage road onto a highway. And Keston shows he’s as much a composer as a programmer by bringing the piece to a musically logical close, essentially backing the work back to its starting position. 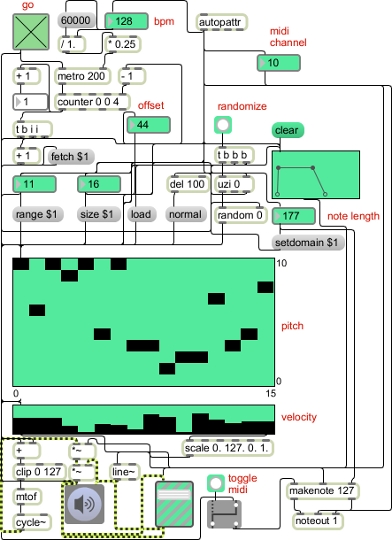