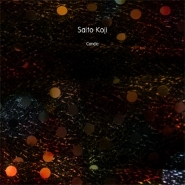 The piece “Candle” by Saito Koji is a single track, and the track could easily be mistaken for a single sine curve. It slowly wends its way back and forth with a regularity somewhat belied by its relaxed pace. It has the gentle curve of the path of a teenage bicyclist taking advantage of an underutilized suburban street on a lazy, sun-dappled weekend morning. In time, as with anything perceived for an extended period, details within “Candle” make themselves apparent. There’s the way an underlying tone appears to separate from the main one as the drone — for that is what this piece of music is, a drone, a long, gently undulating swell of singular sound — hits its peak. There is the matter of the curves within the curve: the inevitable and much quicker little wave that makes up the overarching wave. And then there’s the tone, this lush fume of middle-range sound, one that never tops off nor sneaks below the range of human hearing. The latter is a compositional decision on Koji’s part that keeps “Candle” in focus throughout its half-hour life.