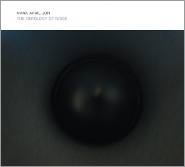 Listen in quick succession at least twice through — not just to, but through — the relatively brief (just over three minutes) track “The One Substance” off The Ontology of Noise (MP3), released earlier this year on the record label Touch. It’s an exemplary opportunity to hear how quickly a series of repeated listens can make even the simplest of noises come to life. At first, the track, composed and performed by Nana April Jun, may come across very much as just one of those soft-to-loud studies in dynamics: the ear responds to the shift from quietude to overwhelming volume in a way that emphasizes the distinctions between the two, and masks the detail in either end of the spectrum.

The piece opens with quiet static that slowly takes on a lush feel. A small sliver of high-pitched sound comes to the fore, followed by another rising element, this time a ring of undulation that sets in motion several iterations of waves upon waves, before settling down for a moment. Then comes a hearty bellows of white noise, something like the histrionic drama of some classic prog-rock song (Nana April Jun has posited Ontology of Noise as a kind of consideration of black metal), albeit played entirely in a palette of hisses.

Well, that’s not quite what it sounds like the first time ’round. At first it’s just haze, then wave form, then static. Only in time and with attention does the variation within the track make itself present, if not entirely self-evident.

Nana April Jun is a pseudonym of Christofer LÃ¤mgren, who is based in Malmö, Sweden. More on Jun/LÃ¤mgren at nanaapriljun.com.