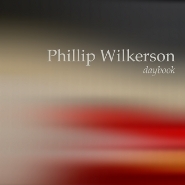 The ethereal washes of Phillip Wilkerson‘s recent album, Daybook, are what probably is summoned up in the minds of many people by the long since common — and, conversely, increasingly ambiguous — phrase “ambient music.” The four tracks on Daybook could have been composed at any point since the birth of the synthesizer, though the absence of melodic intent in them certainly marks them with an admirable spartan reserve generally lacking in the early, heady days of synthesis. Take “A Dream,” the album’s fourth and final track (MP3).

This is classical ambient music. Not classical as in string sections and movements and thematic development all deployed in standard notation. No, it’s classical as in dreamy sound that could just as easily melt into the background as command your attention. And it’s classical as in atmospheric to the point of invisibility, with a tonal quality that is just shy of clinical. And it’s that use of a clinical sound, a gossamer lightness virtually devoid of texture or inaccuracy, that distinguishes Daybook, because Wilkerson’s pieces posit a tension — a tension between the reflective intention of his music, and the steel-hard, if stiletto-thin, sounds with which that intention is committed.