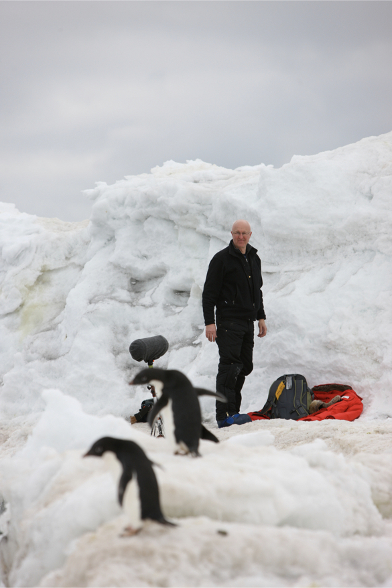 After some snow crunching, and a discernibly heavy breath, a voice emerges from the near silence: “This is certainly the remotest landscape I have ever been recording in.” The speaker is one Chris Watson (pictured above), long ago a founding member of Cabaret Voltaire, and for many years one of the foremost field recordists, capturing audio from around the globe (MP3). “I’m about 78 degrees south,” he continues, “on this deep black tongue of lava and pumice, surrounded by ice and snow. This is Cape Evans on Ross Island in the Antarctic. And I’m just surrounded by the most remarkable, stunning, and daunting views I have ever seen, under this beautiful bright blue sky with a piercing sun. It’s 4pm. The sun’s not going to set. It’s not going to set for another two or three months.”

Watson was in the Antarctic in January to record sounds for a David Attenborough television series titled The Frozen Planet. He collected some of this audio, along with his own commentary, for a podcast as part of the Touch Radio series. Reflecting on previous voyagers to this remote region, he notes, “The interesting thing is, unlike I guess virtually every other place on the planet, the soundscape here will have remained the same.”

Some of the most compelling sounds are those of the “creaking and groaning” (his words) of the ice he recorded with hydrophones, and they resemble whiny rodents under foot.

But in the end, the real aural experience of the South Pole is silence. As Watson reports, “And then the quietness — a really difficult place to record. There are some Antarctic skuas on a small freshwater pool of melted snow down the slope which I occasionally hear, but up here there is nothing else, maybe a two- or three-kilometer breeze just carrying over this slope, but apart from that, this is probably as quiet as it gets on this planet.”

One note of caution: after about 18 minutes, the sound of a whale surfacing breaks in with the surprise and force of a flare gun. The full recording is approximately 50 minutes in length.

More photos and other information at touchradio.org.uk. Photos by Watson and Jason Roberts. More on Attenborough’s series at bbc.co.uk.