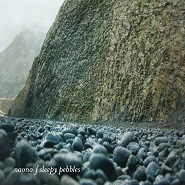 Melodies that seem to warp as they play, notes disintegrating and reforming, coming in and out of focus, all atop rattly beats that sound like robot insects imitating their human overlords — this is just a bit of what makes Sleepy Pebbles by Naono such a repeatably listenable album. The seven tracks that comprise Sleepy Pebbles range from downtempo instrumental pop to nostalgia-tinged soundcraft. The album is at its best when it dispenses with the conventional elements of songs, notably the steady beats that ground some tracks a little too thoroughly, and goes in search of unique sounds. Highlights include “Hobo the Hermit,” which mixes soft glistens and taut percussion (MP3), and “Random Lullabies,” in which field recordings (seemingly of surf) are at play with backward-masked melodies (MP3).