This is Disquiet.com’s streaming-audio service. The interface immediately below will stream in sequence a series of tracks that I commissioned from the musicians. What they all have in common is that each is a response to — a non-verbal answer to — an article from the May 2010 issue of The Atlantic. The article, by an editor at the magazine, Megan McArdle, was titled “The Freeloaders.” It purported to assess the impact of file-sharing on the music industry, but it framed the argument in a manner that (in my mind) contributed little to the important ongoing discussion about the nature of copyright in the Internet Age; instead, it simplistically equated the “music industry” with the record industry, and pointed an accusatory finger. The article was accompanied by this beautiful illustration by Jeremy Traum. In a small irony, the illustration used to decorate the article interpolated a detail of a preexisting work that appears to not yet be in the public domain: 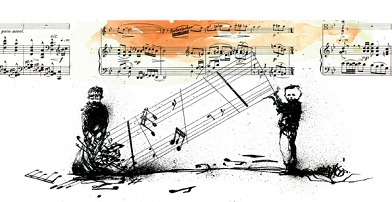 Since the purpose of this album is to respond musically to McArdle, I’ll now let the music speak for itself. Some contributors used the notes as a starting point, while others took the canvas as a picture to be interpreted:

You can flip back and forth through the playlist using the small arrows. It is named Despite the Downturn: An Answer Album, the title phrase taken from a sentence in McArdle’s article.

For my (written) critique of McArdle’s piece, go to these two links: disquiet.com, disquiet.com. I made some additional comments at archive.org, where the audio is housed.

To read the Atlantic article and see (in larger format) the image in question, visit theatlantic.com. (The music shown in the image is reportedly an excerpt from Ernest Bloch’s Suite hébraÃ¯que, which dates from the early 1950s.)

Should you be interested in contributing your own interpretation of the Traum illustration, contact me at [email protected]

Updated May 4, 2010: After the initial seven tracks, an eighth by My Fun and a ninth by Jettatura were added.

Updated May 17, 2010: A tenth track, by Simon Lott and the group Beta Collide, coordinated by Beta Collide member Brian McWhorter, has been added.

Please note that the links below in this post will interrupt the streaming audio. Direct links to download (as well as an interface to stream) the individual MP3s are provided.

2 thoughts on “Despite the Downturn: An Answer Album”