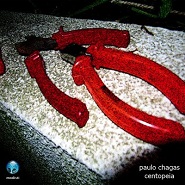 When field recordings mix with noise, the result yields questions — is the noise the result of the recording, a matter of transformation, or is the noise a separate component, a matter of contrast? In the case of Paulo Chagas‘s Centopeia, which adds a third component, that of chamber instrumentation, the answers might may take the form of more questions. Chagas’ is music, at least as heard on this album’s four tracks, that doesn’t so much defy categories as deflate them. At one point a melifluous solo woodwind appears, and it seems to explain the sonic effects that preceded it; it’s as if an aura has eventually taken shape.

Earlier on, birdsong takes place amid metallic rustling, the latter serving as a kind of cage in which the former makes itself heard. Chagas is the rare performing composer whose work is not just a matter of sonic intrigue, but of narrative imagination.

Get the full set at modisti.com.