Attention to Martin Skelly‘s “Playlist Player” has apparently swamped his website. In the meanwhile, photos in addition to these are at Skelly’s flickr.com set. 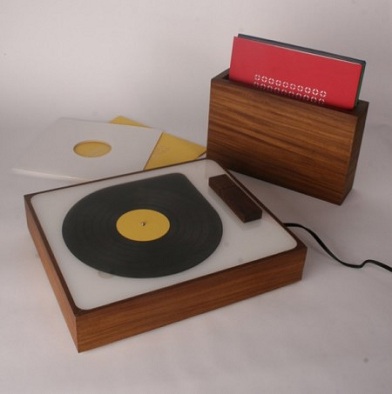 Via iso50.com, this is Skelly on how it functions:

“There are two parts to the design: the player, and the record box containing five different coloured covers. Once the playlists are chosen and synced to the player with a memory stick, the user customises the outside of the sleeve with artwork of their choice. It could be photos of a memorable night or person or typed and hand drawn tracklists. Once the record is placed on the player, the music begins and the outer ring of lights illuminates. As the playlists plays rings of light visible through the translucent record move towards the centre of the disc, like a needle tracking on a record. These lights represent time and not the number of tracks, meaning your music must be enjoyed from start to finish with no distractions like the temptation to skip tracks, fast forward or rewind.”

It’s sort of like the turntable equivalent of a sensaround flight-training simulation, in that it virtualizes a physical activity as a kind of memory aid. Note that it simulates not only the act of placing the album on the turntable, but also the necessity of playing the album all the way through. Now, the latter is not entirely faithful to the turntable experience — we all eventually get pretty good at noting the blank spaces that signal the moment between songs, but still it’s a fascinating attempt to reflect on past media-consumption habits.

There’s a great discussion thread about Skelly’s invention going on now at iso50.com.