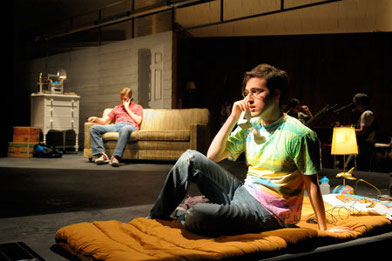 Early on in Girlfriend, the musical based on the 1991 album by Matthew Sweet, one character says to himself:

“Rewind is such exquisite torture, don’t you think?”

He also says it to the audience, evidencing a penchant for knowingness that becomes more apparent, more fully formed, as the play proceeds.

The line is uttered just as the character, named Will, has rewound a song on his big black boombox, which is placed between paperback books and an Empire Strikes Back pillowcase. This is Will (played by Ryder Bach, above right), who has just exited high school and has no idea what’s next, Will who’s about to embark on a romantic relationship with Michael (Jason Hite, left), the schoolmate who gave him the cassette in question on the last day of class.

When Will rewinds the cassette, the smaller auditorium at the Berkeley Rep, where the show is currently being performed, echoes with the “bbbzzzzzzttt” of a tape set on reverse, the music catapulting backwards at a rapid pace.

The torture of which Will speaks is at least twofold — there’s the waiting (a term implicit in Girlfriend, one of the key songs on which is the superb “I’ll Be Waiting”), and there is the impact of the rewind process on the tape cassette. The friction that allows for that backward sound is at once wearing down the cassette and helping you locate the blank space between songs, so you know where to stop. Somewhere in the lizard recesses of your brain, you know that with each such rewind you are further reducing the number of times this cassette will properly replicate the sounds of the album — but desire wins out over logic, which is the theme of any romance.

This moment when technology serves as a touchstone for emotion is rooted in the sonic self-consciousness of the album Girlfriend, which on the CD, between the songs “Evangeline” and “Day for Night,” inserted the sound of a needle touching down on a piece of vinyl, a nostalgic effect that appears in the digital version of the record (at least the one available through emusic.com) at the start of “Day for Night.”

The moment, in retrospect, is also true to its time: 1991 was the year LP sales truly bottomed out, and cassettes were about to be eclipsed by CDs, as displayed on this chart (from swivel.com):

The vertical red line shows 1991. The rising yellow line, which shows CD sales, intersects the declining maroon (cassettes) in 1991; the green line, which has hit rock bottom, is vinyl. The chart starts in 1975 and ends in 2005.

A disclaimer for the stats-focused: technically, the tape that Michael gives Will isn’t a “prerecorded” one, but one that he himself taped, presumably from a CD, since there’s only a CD player, no turntable, in the stage set that shows his home. The above chart only shows numbers for prerecorded cassette tapes, not blank ones.

It’s worth noting, as well, that sales of cassettes declined much later than those of vinyl, something I hadn’t fully appreciated when participating in the recent discussion about nostalgia and cassettes at Rob Walker’s murketing.com. The above data doesn’t even take into consideration singles, which contributed substantially to overall cassette sales — all of which is to say, vinyl nostalgia may today appear stronger than cassette nostalgia simply because cassettes remained a part of everyday consumer life for almost a decade and a half longer than vinyl. We haven’t had enough time to be fully nostalgic for them. (Much of the recent news about spiking vinyl sales list 1991, the year of Girlfriend‘s release, as a point of comparison: billboard.biz, pitchfork.com. In part that’s because of how poorly vinyl sold in 1991, and in part it’s because 1991 saw the debut of Nielsen SoundScan, which tracks record sales.)

OK, enough data. Back to the show: the few songs in it that aren’t from Girlfriend don’t hold up to the ones from Girlfriend any more than they did when they were initially released on Sweet’s later albums 100% Fun and Altered Beast. The songs from Girlfriend are interpreted ingeniously, especially “Evangeline,” which is performed by Will and Michael in a manner that manages to both mock and embrace its source material (a nun-superhero-alien-cop in a movie they watch repeatedly in the privacy only available at the local drive-in).

My biggest concern going in (aside from how bad traffic back to San Francisco from Berkeley would be at 10:30pm on a Saturday night) was that what made Girlfriend so special was not just the songs, but the production, with a serious foundation in Revolver/Rubber Soul-era Beatles, and the twin guitars of Robert Quine and Richard Lloyd — who, as Disquiet.com commenter Kevin Seward noted earlier, “saved & defied the notion of being a hired gun musician” (disquiet.com). In the Berkeley Rep show, a four-piece rock band handled the challenge ably, especially lead guitarist Shelley Doty.

More on the show (book by Todd Almond, direction by Les Waters, choreography by Joe Goode), which runs through May 16 at the Berkeley Repertory Theatre, at berkeleyrep.org.