The skittery vocalizing and dusty rumble that open Luke Moldof‘s recent live performance on Rare Frequency have a ritual vibe to them — not the tabla-banging drum-circle vibe of post-hippie space music, but a sense of ritual purpose nonetheless. This may have to do with melodic fragments that could be mistaken for distant, obfuscated Native American chanting. Or it could be the result of the sheer intense concentration inherent in Moldof’s music, a music in which small scratchy noises take center stage only to be slightly nudged one way or another (MP3), and the occasional appearance of guitar is less a matter of playing in the traditional sense, and more a matter of yet another sound object a mix that emphasizes deep quietude: 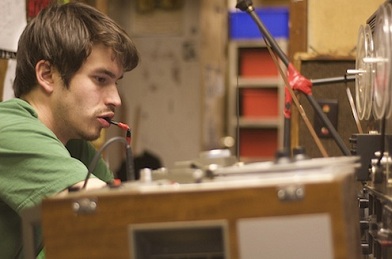 Interview with Moldof at rarefrequency.com, in which he talks about his interest in extremes of volume:

I think that things that are very quiet and sparse can often be way more “extreme”than things that are deafeningly loud with all the spaces filled up. I guess my main reasons for being drawn to extreme volume is that the sound becomes more of a physical presence and can be felt in the body. There are also things that come out in high volumes that wouldn’t otherwise be apparent. For instance if you listen to Phill Niblock extremely loud, you will hear a lot of things that you wouldn’t hear at a moderate volume.