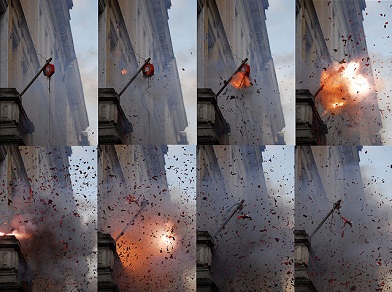 We may celebrate Independence Day in the U.S. with firecrackers, but July 4 aside, for many the popular combustibles summon up images of China, where they are thought to have been invented.

And yet for all China’s association with firecrackers, the country is anything but laissez-faire about them. There were bans around the time of the recent Olympics held there. And by some reports, there appears to have been a long-running ban, from 1994 to 2006, in areas of Beijing, and elsewhere.

Robin Dumont captured sounds of firecrackers being launched in 2006, when that ban was relaxed, and posted two and a half minutes of them archive.org (MP3, MP3)

For soundcrafters looking for some seasonal audio experimentation, they make good source material. For the rest of us, the recordings provide a consideration along the lines of the phonography koan, “If a tree falls in a different forest, does it sound different?” How are these recordings Chinese — is the layering of sounds, the sheer density of simultaneity a sign of populism beyond that of most casual municipal fireworks? Is there something in the range of noises (pops, crackles, explosions, whistles, roars — not to mention some car alarms) that speak of China-specific materials, experience, or culture?

Original files at archive.org, including higher-resolution VBR and Ogg Vorbis recordings. Dumont has a lot of great Chinese audio available, including sounds from a Chinese McDonald’s and the Beijing Metro: archive.org. (Photo of firecrackers exploding at five frames per second shot and compiled by Wesley Oostvogels, flickr.com. It was taken at a Chinese New Year celebration in Antwerp, Belgium.)