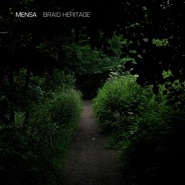 Perhaps the biggest shift in so-called “space music” since the 1970s is how it used to sound like outer space, and now more often than not it sounds like a field recording from inside a spacecraft. This probably doesn’t have much to do with the more widely available knowledge that space is a vacuum, and more to do with the influence of minimal techno’s emphasis on dank corridors and creaky machines. It took a long time, but our collective image of that vast frontier has moved from Carl Sagan’s vision to Andrei Tarkovsky’s, from the naturalist hypothesis of Cosmos to the psychological conundrum of Solaris.

Nor, to be clear, is it necessary that a space-music album wrap itself in the vestiges or vestments of science fiction — with the rise of abstract electronica, space music is a broad term, embracing all kinds of sonic experimentation. Take the recent two-song EP by Edu Comelles, who records as Mensa. Titled Braid Heritage, it consists of lengthy mixes of long synth tones and tiny little audio chatter, like the workings of an abandoned or unmanned space ship deep into a mission. “Lengthy” may be the key word here. The tracks were originally part of the Moorland album on the Test Tube netlabel, and they appear here in extended form, one, “Hermitage of Braid (Slow Version)” (MP3), almost 9 minutes long, the other, “Blackford Hill (Extended)” (MP3), nearly 11. The attenuated format suits the music’s slow sense of development and attention to the nuanced opportunities inherent in repetition.

For comparison’s sake, here are the original versions:

More on the release at restingbell.net. Check out the original versions at monocromatica.com/netlabel.