The following essay I wrote, “Crosstown Static,” was published this month in Shadows Have Shadows, a fun little physical newsprint project that resulted from a web-based mailing list in which I participate; the printing was facilitated by the neat newspaperclub.co.uk service. The full issue is also available online for free at shadows-have-shadows.com. 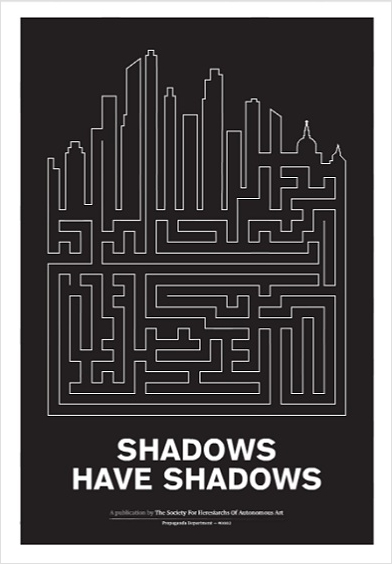 As the introduction to Shadows Have Shadows states, we “needed a focal point” once we determined to channel our online discussions into something physical, set, determined:

“This was easy: the city. It turned out that we were fascinated by certain aspects of urban places: street-level urbanism, cinematic visions of the city, impressionistic analysis and psychogeography, flaneurie, technology, cybercities and the production of everyday life.”

Among the varied contributions that make up Shadows Have Shadows are a narrated walk “from Aldwych to Millenium Bridge via St Paul’s” by Paul O’Kane; glimpses of Caracas, Venezuela, by Jeanne Bonnefoi; a comic by Thorsten Sideb0ard; a photo essay (“The Secret Life of Shepperton”) about the town where J.G. Ballard lived for over half a century; and an interview (by Steven Bode) with Suki Chan about her two-channel video installation “Sleep Walk Sleep Talk.” It’s a great collection, and I’m gratified to have been able to take part in it. 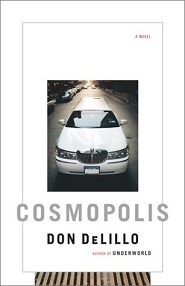 This is how the book opens, the final sentence of its first paragraph, characteristically taut: “It was a matter of silence, not words.” This is how the book ends, its last sentence, no less declarative, yet elliptical to a fault: “He is dead inside the crystal of his watch but still alive in original space, waiting for the shot to sound.”

The book is Cosmopolis by Don DeLillo, poet laureate of American English. It was published in 2003, the second of what is now a series of four short novels, novellas really. This series follows DeLillo’s doorstop, the oversize Underworld (1997), and it’s not difficult to read these four slim volumes as placeholders, deadpan divertimento, side trips on his way to his Next Big Novel. They are, in order of arrival, The Body Artist (2001), which preceded Cosmopolis, then Falling Man (2007), and, published earlier this year, Project Omega. Were DeLillo to continue at this rate, the collected novellas could cumulatively outweigh Underworld.

And whereas the four books are not directly related — no central characters, no shared setting — they are not unrelated. All four are readable together as the work of a man wrestling with his profession, his calling. Each book cautiously and categorically observes a different form that might supplant the written word as a mode, as perhaps the preeminent mode, of human communication. Thus, The Body Artist is about performance art. Falling Man is about photography. Project Omega is about film.

And as for Cosmopolis, it is about sound. Cosmopolis tells the tale of a very wealthy Manhattan entrepreneur making his way across the city in a bright white limousine, and the book is less a novel than it is a road story. Road stories are catalogs of incident, and while this book is not short on incidents, it accumulates a much larger catalog of sound, the sounds that occur during that trip, a glossary of urban ambient noise and of not-incidental plot-related audio, from that opening silence to the final, resounding “sound” (the final word of the book, and not without authorial intention).

DeLillo has stated in the past that “lists are a form of cultural hysteria,” and so here is an initial list, just a handful or two of the numerous incidents in Cosmopolis in which communication is subsumed by, or accomplished wordlessly with, sound. “A cab squeezed in alongside, the driver pressing his horn. This set off a hundred other horns.” “He was having trouble speaking. The words exploded from his face, not loud so much as impulsive, blurted under stress.” “The two men made little snuffling sounds, insipid nasal laughter.” “The atrium had the tension and suspense of a towering space that requires pious silence in order to be seen.” Characters are “weaving down the avenues, speakers pumping heavy sound.” There is the “electric knell of emergency vehicles.” A murder victim is tangled in the cord of a microphone. One woman’s words, her meaning, is telegraphed ahead of time “in the nasal airstream of her vernacular.”

Often here sound is significantly more important than is spoken language, so much so that sounds within sounds take on special importance: “He heard the static in her laugh.” And these are not merely matters of micro-interaction between individuals. There is one anecdote in which a high-ranking individual making a public statement stops ever so slightly before proceeding, which leads to endless pondering not of what he said, and not of what he didn’t say, but of what the brief, silent moment, the break in language, meant: “They are trying to construe the meaning of the pause. It could be deeper, even, than grammar.” We are warned: “A person rises on a word and falls on a syllable.”

This is a novel in which sound is imprinted on place and on object. The story’s main character, its wealthy financial-market figure, has not one but two elevators to his private apartment, each with its own specific soundtrack. “I have two private elevators now,” he explains. “One is programmed to play Satie’s piano pieces and to move at one-quarter normal speed. This is right for Satie and this is the elevator I take when I’m in a certain, let’s say, unsettled mood. Calms me, makes me whole.” The elevator’s pace matches that of the trip across the city, which is why the novel is as unsettling as it is; the novel slows our pace so we pay attention, and when we pay attention, we listen:

Then there is the gun that plays a fulcrum-like role in the story — a gun that requires a voice imprint to function properly. And as if there were any doubt, this is the novel that has as a central set piece a visit to “the last techno-rave,” which is written out in all caps in the book, marking its centrality. This is DeLillo on how sound at the rave subsumes music much in the manner that outside the rave sound subsumes language: “Music devoured the air around them.” 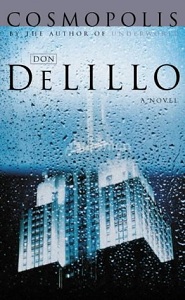 As for those rhetorical koans for which DeLillo is famous, they do appear in Cosmopolis — early on: “The yen rose overnight against expectations” — though with far less frequency than in the novels that preceded it. Mostly, such verbal clarity fails in the face of sound. This is a book about that failure, about sound, the pressure of sound on the novelist, the suffocating sound, the claustrophobic sound, the sound that blanks out language: the sound that communicates more directly than language and that yet can’t be explained with language, not even the language of someone as accomplished as, say, Don DeLillo. Words are questioned in Cosmopolis directly, words as common as “phone,” and “computer,” and “ambulance.” (DeLillo is happy to propose the occasional word, too, as when someone “prousts” the lining of an automobile, which is to say cork it for silence, which is to say remind us of the cork-lined room in which Marcel Proust wrote, attempting to protect himself, his writing, from the noise of the world.)

“It was the tone of some fundamental ache,” DeLillo writes, describing the sound and effect of traffic. “Buses rumbled up the avenue in pairs, hacking and panting.” If our human meaning is, truly, in our sounds, then these buses aren’t merely being anthropomorphized — DeLillo’s is a kind of urban animism, one in which everything resounds, everything communicates.

So this is Cosmopolis, a novel that sprawls across a city, crawls across the city, a novel that spends more time listening to that city than observing it through any other of our five (or six) senses. It’s a novel that shortly after opening has a man staring at a blank page, unable to read (“Nothing existed around him. There was only the noise in his head, the mind in time”), and it ends with a gunshot that is heard more than it is felt. It’s arguably also a book about the financial markets, but that information repeatedly is served up as data, a natural force that is barely comprehensible, certainly not as an economic barometer, only as a power unto itself (“In fact data itself was soulful and glowing, a dynamic aspect of the life process”), another animistic spirit.

At one point, the man stalking the novel’s protagonist says of another person he had murdered, “There was a brief sound in his throat that I could spend weeks trying to describe. But how can you make words out of sounds? These are two separate systems that we miserably try to link.” When a writer of DeLillo’s stature commits to the page that sort of concern about the limits of language, we must take him at his word.